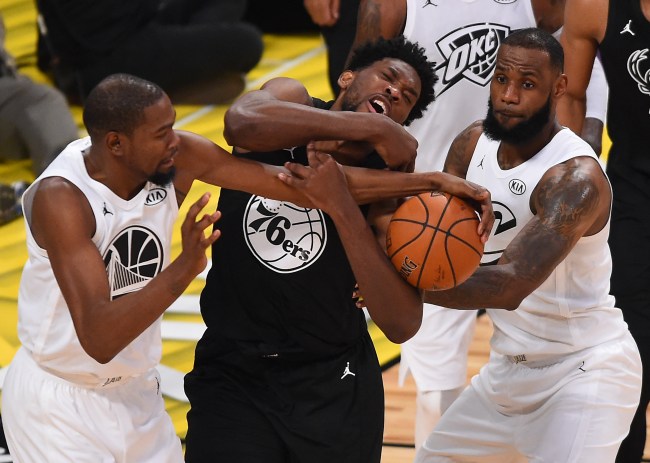 Over the years, the NBA All-Star Game jerseys have seemed to be pretty detailed, as they often reflect the theme of a city or the logo that the league chose for the midseason event. Of course, as I say that, the picture above of Kevin Durant and LeBron James ripping the ball from Joel Embiid shows something entirely different, with the uniforms looking more like a game between to middle schools rather than the best ballers on the planet, but, hey, the whole black and white look seemed to work thanks to the simplicity.

You know what doesn’t work, though? Whatever some leaked pictures showed the other day, with people wondering if the design below is, in fact, what the NBA All-Star Game jerseys this year will look like. Take a peek to see how heinous they look.

Really? You can’t seriously tell me that all the smart people over at Nike and Jordan Brand landed on those for this year’s All-Star Game, right? They honestly look like a starter jersey for a fan going to his or her first ever basketball game, not something that guys like LeBron and Durant should be wearing. In a word, they’re awful.

I’m not the only one who thinks this, though, because, once the picture leaked online, Twitter exploded with reactions that were, well, less than kind. Take a look at some of the things people were tweeting.

Wholeheartedly, this looks like some of the reject jerseys you find in Ross and Marshall’s

Really dug deep and got creative with these ones

The apparent design was s bad that some fans even mocked some up of their own that they think look better, using the Nike template from above and sprucing them up a bit. Here were a few options from Twitter.

How about this? It represents the team they play for, but with the Hornets colors. pic.twitter.com/LnaHRBe74j

Of course, there’s still hope that, just maybe, someone is playing a mean (but hilarious) joke on the entire NBA fanbase with this, and just snapped a picture of an ugly jersey they found in a department store. That’s probably just a pipe dream and a hope of mine, though, because, while my life doesn’t evolve around what the NBA All-Star Game jerseys look like, it pisses me off that Nike can’t come up with something better. I know weed’s legal in Oregon where the company is based, but, sheesh, is this really what we’re just throwing out there these days, guys?

Here’s to hoping that, if these are the real NBA All-Star Game jerseys, Nike sees the negative reactions and quickly put together a redesign, because people seem pissed.