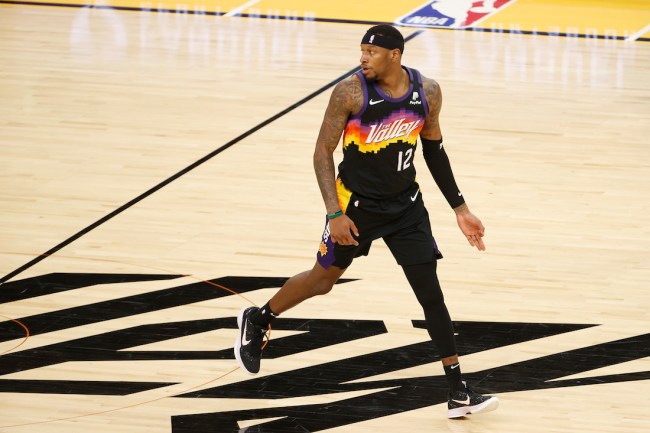 The NBA Finals pits the Phoenix Suns versus the Milwaukee Bucks in quite the tasty matchup. Sure, two-time MVP Giannis Antetokounmpo is injured and (sadly) may miss the entire series with a knee injury, but there’s still plenty of cool storylines as the NBA seeks to crown its next champion.

For starters, neither of the two teams have won a title in at least 50 years, with the Bucks doing so back in 1971 and the Suns never having won a championship. Now that’s some cool little historical drama.

Second, this is point guard Chris Paul‘s moment to shine. The surefire Hall of Famer has pretty much done everything during his 16 years in the league… except win a title. At age 36, his first trip to the NBA Finals might be his best (and last) shot at legitimately securing a ring for himself, which will add to his legacy as one of the all-time greats should he get his.

Lastly, there’s this whole Torrey Craig thing, which many basketball fans probably don’t even know about — but is cool AF, nonetheless.

Craig, a seldom-used small forward who has averaged just 12.6 minutes per game during the NBA Playoffs to this point, will actually earn a championship ring regardless of which teams wins the NBA Finals. Why? Because he played 18 games for the Milwaukee Bucks earlier this season before getting traded to the Phoenix Suns, meaning he contributed to both teams who are vying for a title.

No matter who wins the Finals, he will get a ring for playing for both the Suns and Bucks this season.

This is a cool twist of luck for Torrey Craig, but, honestly, it has to feel pretty weird for him. I mean, he’s obviously going to do anything he can to help the Phoenix Suns with the NBA Finals as much as he can, but knowing he has the chance to get a ring even if the Bucks win has to be in the back of his mind. Not that that should (nor will) play into how hard he plays during the series.

A similar coincidence occurred during the 2016 NBA Finals between the Cavs and Warriors, when longtime Cavalier Anderson Varejao had a similar opportunity to collect a ring after the Cavs’ historic championship. In that instance, Varejao turned down the free jewelry.

Varejao eligible to receive a championship ring from time with #Cavs, but told he has no plans to accept after finishing with #Warriors.

I assume Torrey Craig would do something similar as Varejao and turn down the ring unless his team wins the NBA Finals. But, hey, nobody should fault him should he utilize this little luck and accept the championship jewelry should the Bucks beat the Suns.