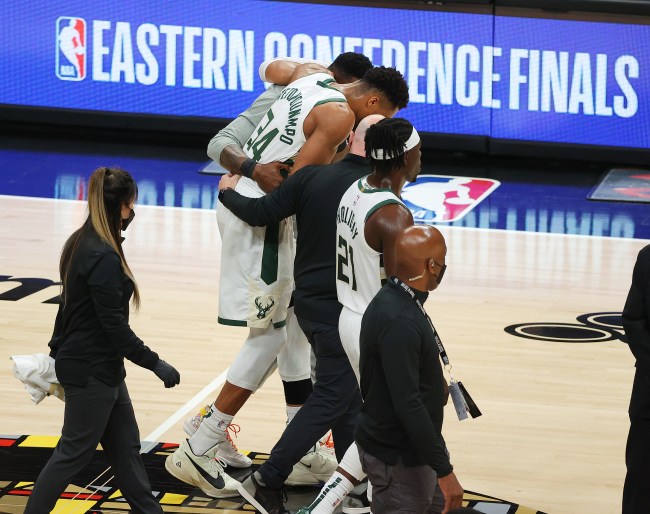 Giannis Antetokounmpo went down with an injury during game 4 of the Eastern Conference finals and the news coming out of Milwaukee’s inner circle isn’t good.

In the third quarter of Tuesday night’s playoff game, Giannis landed very awkwardly on his left leg while attempting to make a defensive play on the ball.

After lying on the floor in pain for several minutes, Giannis would later limp to the locker room on his own accord.

Giannis limping but walking unassisted to the locker room pic.twitter.com/OpSych2fX5

The Bucks superstar was then ruled out for the rest of the game with a hyperextended knee.

Giannis Antetokounmpo (left knee hyper-extension) has been ruled out for the remainder of tonight's Game 4 vs. Atlanta, the Bucks say.

According to NBA insider Farbod Esnaashari, the Bucks fear Giannis has suffered a severe ACL injury before his MRI exam tomorrow.

Sources: People within the Milwaukee Bucks organization fear that Giannis Antetokounmpo has suffered a severe ACL injury. However, no MRI has been done yet.

Update Giannis does not have structural damage to his knee but it’s unclear when he will return to action.

There is no structural damage to Giannis Antetokounmpo's left knee after his awkward landing last night in Atlanta; ligaments are sound, sources tell @wojespn and I. Timetable to return is unclear.