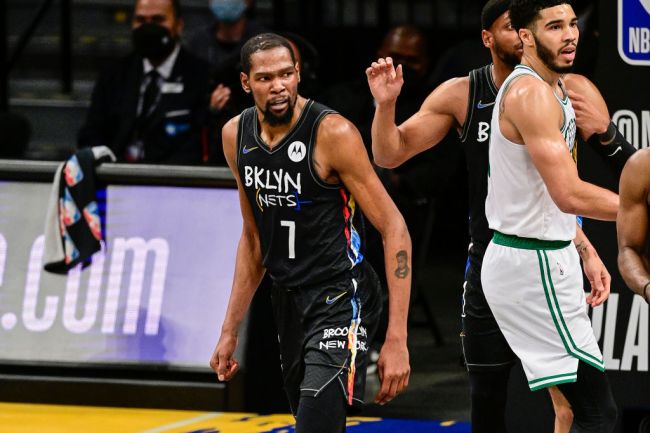 The Brooklyn Nets should be great this season. You know it, I know it, and general managers around the NBA sure as hell know it based on the results of NBA.com’s annual GM survey.

General managers like the Nets so much, that the vast majority of them have Brooklyn not just winning the Eastern Conference, but hoisting the Larry O’Brien trophy when it’s all said and done this season.

According to the survey, 72% of general managers picked the Nets to win the 2022 NBA Finals. The Lakers received only 17% of the vote, while the defending champion Bucks earned just 10% of the vote. Last year, 815 of GM’s around the league picked LeBron James and the Lakers to win the title.

When looking at the results of who general managers picked to win MVP this season, it’s easy to see why most picked the Nets to win the title. Kevin Durant led the charge with 37% of the vote while James Harden was tied with Joel Embiid in the No. 4 spot on the list receiving 7% of the vote. Durant and Harden were also among the Top 4 names mentioned when GM’s were asked about which player forces opposing coaches to adjust the most.

It’s unclear whether general managers took part in this survey prior to the recent controversy surrounding Kyrie Irving and the vaccine. It’s safe to say that the majority of GM’s out there would agree that the Nets’ chances of winning a title without Irving playing in half the team’s regular-season games – and home playoff games – would lower the team’s chances tremendously.