Kyrie Irving Is A ‘Contrarian Without A Cause,’ Says Prominent NBA Player In The Wake Of Report He Could Miss All Home Games 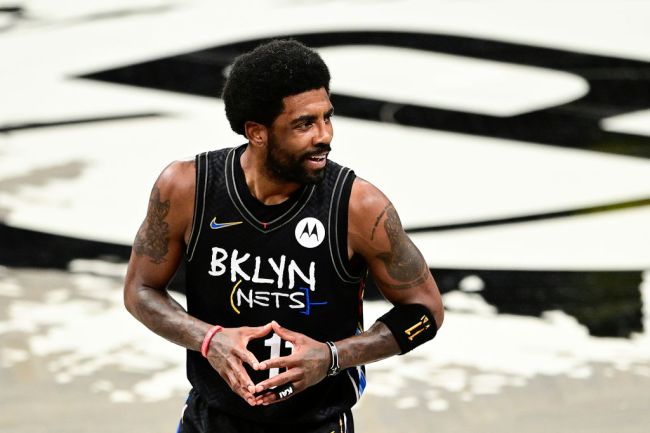 In June 2019, Kyrie Irving unceremoniously left the Boston Celtics to sign a four-year, $141 million deal with the Brooklyn Nets, injecting euphoria into all 12 Nets fans.

Fast forward a couple years and those same people may be one of the only fanbases in the NBA robbed of seeing the 7x All Star up close and personal.

Kyrie’s capacity for contrarianism must never be underestimated.

A prominent NBAer just texted me that Kyrie Irving is a “contrarian without a cause” and that is just a perfect sentence.

A recent Rolling Stone piece about anti-vaxxers in the NBA points out that Irving, who is allegedly unvaccinated at the time of this writing, could miss every home game of the upcoming season if he remains unpoked.

The ball has already been set in motion.

Kyrie Irving is not expected to attend Nets media day today due to New York City health and safety protocols but the Nets fully expect Irving to accompany the team to training camp in San Diego, sources tell @WindhorstESPN and I.

“I expect it not to be an issue,” Kevin Durant said at media day.

Kyrie Irving on if he expects to play in home games this season:

"Everything will be released at a due date once we get this cleared up. As of right now, please respect my privacy." pic.twitter.com/W7fqrFkWY5

While there is no vaccine mandate imposed by the NBA, New York City requires anyone above the age of 12 show proof of receiving at least one dose of a COVID vaccine to participate in any indoor entertainment, NBA games included.

“He is going to try to figure that out as it comes, because it’s not religious-based, it’s moral-based,” Tyki said. “You may have to sit on the sideline, you might not have to be in the arena during this. If it’s that freaking important to get a vaccine that, hell, it’s still not preventing the Covid then I’d rather them working it out that way than to say, ‘Hey, if you don’t get the vaccine, then you can’t be a part of the franchise that you f*ckin’ helped build.’”

The Athletic recently reported that 90% of the NBA is vaccinated, so every day this is becoming more-and-more a Kyrie problem.

But, according to Tyki Irving, there are “so many players outside of him who are opting out” and the rules should be to accomate 50ish of the 530 NBA players.

“I would like to think they would make a way,” Tyki Irving said. “It could be like every third game. So it still gives you a full season of being interactive and being on the court, but with the limitations that they’re, of course, oppressing upon you.”

What may be more concerning for Nets fans is Irving’s bizarre social media activity.

“Irving, who serves as a vice president on the executive committee of the players’ union, recently started following and liking Instagram posts from a conspiracy theorist who claims that “secret societies” are implanting vaccines in a plot to connect Black people to a master computer for “a plan of Satan.” This Moderna microchip misinformation campaign has spread across multiple NBA locker rooms and group chats, according to several of the dozen-plus current players, Hall-of-Famers, league executives, arena workers and virologists interviewed for this story over the past week.”

Well, I guess it’s not that bizarre for a guy who helped popularize the flat-earth theory and denied the moon landing.