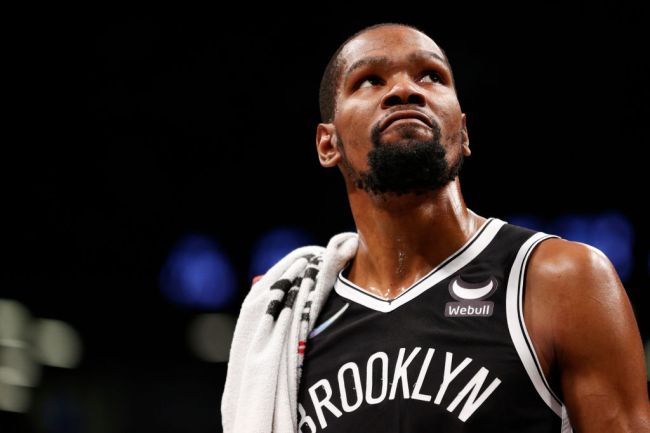 The Brooklyn Nets could be in for a long summer. They know that both of their star players want out and they need to find a way to secure the team’s future in any trades involving these stars.

Basketball fans already know that interest in Kyrie Irving around the league is limited, although it appears the Lakers are ready to do whatever they need to in order to land Kyrie. What fans weren’t expecting was for the Nets to have a hard time trading Kevin Durant.

Durant is still capable of lifting a team to contender status and is, by far, the biggest name currently available to teams looking to add a star.

However, according to ESPN’s Brian Windhorst, the cost for Durant may prevent teams around the league from trying to land the Slim Reaper.

.@WindhorstESPN doesn’t see a Kevin Durant trade happening for a while 🤔

“The market does not want to pay a super premium price for [Kevin Durant].” pic.twitter.com/ePagwlac3h

“Kevin Durant is obviously a very valuable player. Nobody doubts that this guy is still in his prime years as an MVP-level candidate, who can completely swing a team from pretender to contender with his presence. However, the market does not want to pay a super premium price for him. Because if you trade away all of the top assets on your team to get him, he becomes less valuable to you. That gulf is why were in a stalemate right now, and could have one for a while.”

Based on what the Nets reportedly offered to the Timberwolves in a deal for Durant, there might not actually be anybody in the league who can afford to trade for Durant and still have a team he can win with afterwards.

It looks like NBA fans should preparing for this to take a while.