Guys, There’s Actually An ‘NBA Jam’ Version That INCLUDES Michael Jordan In It Floating Around Out There 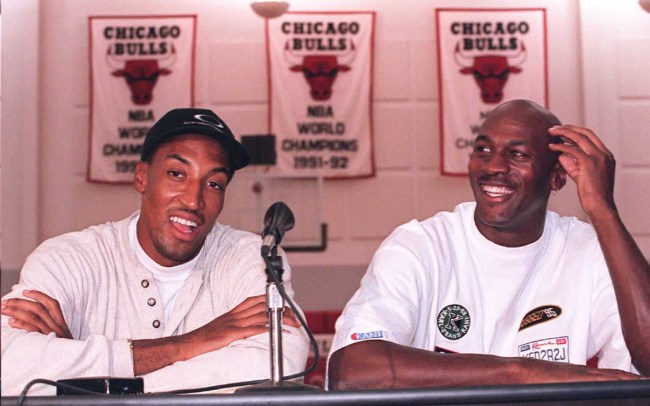 NBA Jam was one of those classic sports video games that everyone loved growing up. It was where you could choose a couple different duos from you favorite team, put them together in a classic arcade style hoops game, and have them catch fire with long-distance threes and absurd dunks. It really was a time suck once you started playing with buddies.

While NBA Jam‘s legacy still holds strong today — enough so, in fact, that people are out here making highlight videos for YouTube — one thing that the game never gave us was the chance to play with the greatest basketball player of all time, Michael Jordan. There’s a very good reason to that, too, because MJ, due to an exclusive rights deal with Nike, wasn’t able to be part of the NBA Players Association group license, which other players used for their likeness to be duplicated.

So, although we got guys like Scottie Pippen and BJ Armstrong, or Alonzo Mourning and Muggsy Bogues, we never got to play with his Airness.

Well, in an interview with Heavy‘s Brandon “Scoop B” Robinson, the official voice of NBA Jam, Tim Kitzrow, revealed a pretty cool story about how there are actual, secret copies of NBA Jam that feature Michael Jordan — as well as Gary Payton and Ken Griffey Jr.

Payton, who played for the Seattle Sonics, wasn’t initially in the game, but was later included. And Griffey, because of his being an MLB player, couldn’t be included. But the two of them and Jordan, as buddies, wanted to be in the game regardless, so the NBA Jam crew actually produced a few special copies of the game for the three players in them, according to Kitzrow.

Per NBC Sports, via Heavy:

“So we got a call from their agents and I came back in the studio and recorded their voices. The artists put together the visuals and we sent them each individual a large NBA Jam package……There’s only four to five cabinets in the world that exist. I’d love to ask Michael Jordan if he still has his.”

To find out that Michael Jordan, who could never be used in a mass-produced video game, is actually included in a version of NBA Jam has to be the coolest thing I’ve heard all day. And, like Kitzrow, I wonder where that copy of the game actually us, because it would have to be worth a pretty penny if it’s floating around somewhere.

Although we may never play NBA Jam with MJ in it, there’s still hope that, just maybe, it could happen, as Kitzrow said he hopes to talk with the game’s developer, Mark Turmell, about legally releasing another version with Jordan in it.

“…maybe one day I’ll talk to Mark Turmell and see how, if possible, legally we could release the Holy Grail with Michael Jordan in it, see it, or at least get in into the Hall of Fame. Some discussion that the Hall of Fame will do some updating to exhibits on the effects of video games on the league and have an old NBA Jam cabinet. That would be great to have the Michael Jordan version there.”

Can someone please make this happen? It’d create the best duo in NBA Jam history with Jordan and Scottie Pippen together, so we deserve to see it.