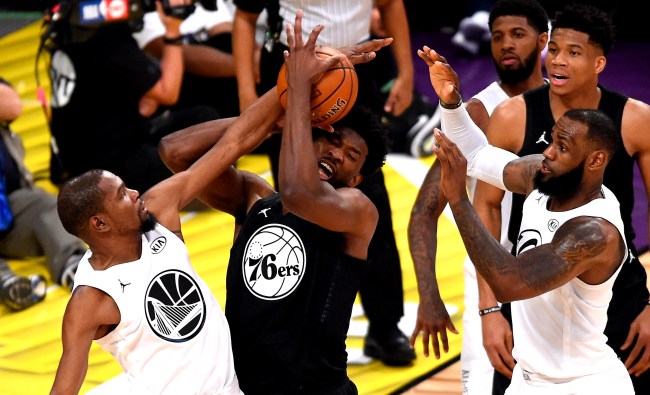 The NBA is no longer going to allow teams to lie about their players’ heights and fans cannot wait to see how tall players like Kevin Durant (especially Kevin Durant), Chris Paul, Joel Embiid and others really are.

According to Marc Stein of the New York Times…

“NBA teams were notified this week that they must certify and submit the precise height and age for every player within the first week of training camp. For years some players have been listed as taller — and some shorter — than they really are. The league clearly wants to change that,” Stein wrote on Twitter. “Height will be measured with players’ shoes OFF, I’m told. Player weight will not be sought because that number fluctuates so often. Among the motivations for this new policy, sources say, is the fact that Buddy Hield’s age was found to be recorded incorrectly in 2018.”

This change won’t really have any effect on the games themselves, but accuracy is never a bad thing. Especially if it means that NBA fans will be able to stir the pot one more time with some of the touchier players in the league.

Can I get a little clarification on why this matters? Are people going to prepare for KD differently because he's listed at 6'11" instead of 6'9"?

I just explained that.

KD about to be 7’0 now finally

6ix9ine: Your honor, have you ever noticed Kevin Durant doesn’t really look 6’9” pic.twitter.com/fwiA01OJSk

So long JJ Barea being listed at 6’ https://t.co/UWFFcn57uk

Isaiah Thomas showing up for his certification pic.twitter.com/SUdDAWPbE7