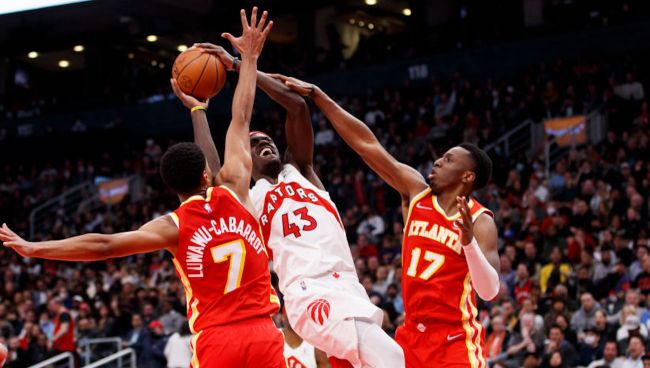 Most of the awesome bets I’ve won in my life have been prop bets and futures bets. First touchdown scorer in the Super Bowl, winner of the Home Run Derby, Liverpool to win the Champions League and Premier League — things like that. Rarely, if ever, have I cashed in one of those mind-blowing multi-leg parlays, especially one that turned just 25 cents into over $6,000.

On Wednesday morning, following Tuesday night’s slate of NBA games, the FanDuel SportsBook Twitter account posted a mind-blowing ticket from a bettor who hit on a 5-leg, +2568700 first-basket parlay.

The bet, submitted to FanDuel by @McGarryAndrew, cashed after he correctly wagered on Darius Garland of the Cleveland Cavaliers (+550), Isaiah Jackson of the Indiana Pacers (+850), Pascal Siakam of the Toronto Raptors (+550), Patty Mills of the Brooklyn Nets (+700), and Terry Rozier of the Charlotte Hornets (+700) to all hit the first basket in their respective games.

As a result, this lucky bettor turned just 25 cents into $6,422 dollars, which is more than some gamblers ever win in a lifetime.

Not to be a Debby Downer, despite the undoubted high that this bettor must have been feeling, you’ve got to wonder if they regretted not placing a bit more on the bet. Had this person wagered a mere dollar, for example, they would’ve won over $25K. If they bet a mere five bucks, they would’ve netted $128,440, which is genuinely life-changing money. All that said, congrats to this dude, who now owes a beer to any of these NBA athletes if he ever runs into them at the bar. Those are the rules.

RELATED: Insane $579K Parlay Win Draws Suspicion Over Indications It May Have Been Won By A Kid