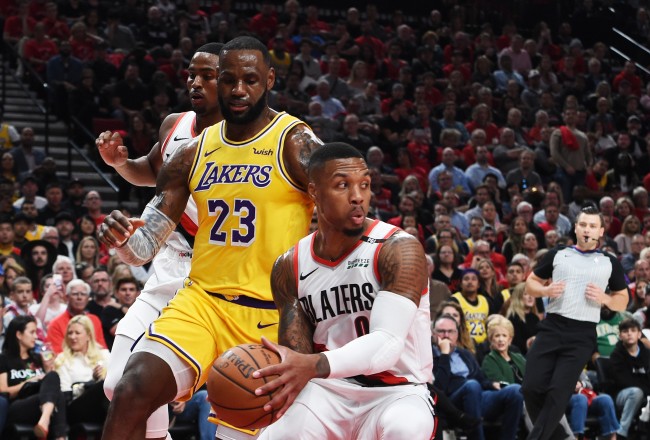 The NBA Playoffs are nearly here, with a few games left in the league’s regular season restart before we have the drama of the postseason hitting us. While some teams have already locked in their seeding — like the L.A. Lakers, who clinched the Western Conference’s top seed — that doesn’t mean every team is playoff ready; including those aforementioned Lakers.

The Purple & Gold have been a mess since entering the NBA bubble, with LeBron James and Anthony Davis helplessly trying to carry a depleted roster. The results haven’t been great, as the Lakers have gone a measly 3-5 since the league restarted. There’s clearly cause for concern internally, especially since James said there are some things off the floor that might be impacting the team.

In explaining why the Lakers are struggling at Disney, LeBron said there was something going on, off the court, that he couldn’t control, and he’d rather not discuss. That sounds…ominous? Final Thoughts from OKC-LAL https://t.co/b3382do3Ir

Are the Lakers their own worst enemy right now? Possibly. But with the NBA Playoffs just a few days from starting, the West’s top seed may also be battling an even bigger enemy: Reports that other teams are purposely throwing games in order to get the Portland Trail Blazers into the postseason to match up against West’s top seed.

According to Yahoo! Sports, there’s a legit conspiracy theory floating around that teams inside the NBA bubble are circling up to sabotage the Lakers, hoping that the talented and upstart Blazers — who boast stars like Damian Lillard, CJ McCollum and Carmelo Anthony, among others — could sneak into the NBA Playoffs as the eighth seed to present a serious problem for Los Angeles.

The hottest conspiracy theory in the NBA is that the Lakers’ rivals in the Western Conference are trying to help Portland become the eighth seed in the playoffs.

The Trail Blazers have been one of the more impressive teams in the bubble, with wins over Houston and Denver, and they nearly beat Boston, which is third in the East and has won 46 games.

So when Clippers coach Doc Rivers rested Kawhi Leonard on Saturday against the Trail Blazers, and then pulled his other star, Paul George, from the game with five minutes remaining and the Clippers trailing by three, eyebrows raised. Was this an attempt to throw the game to improve the chances the Lakers would have to see this tough team in the first round?

Rivers said George simply was on a minutes restriction and had reached his limit.

Then the coach was asked if he thought the Trail Blazers could beat the Lakers.

“I don’t get involved in that,” said Rivers, whose team beat Portland despite not having its stars in at the end. “I honestly don’t look at it. I heard our guys talking about it, I’m like, ‘Listen, that’s their business. Our business is who we’re playing.’ We need to focus on that.”

Now, Rivers’ response is sort of par for the course. But it gets a little fishy when watching one of his best players, Paul George, reply to a question about him being benched in a close game with the Blazers — which resulted in the All-Star smirking about “load management” being the reason.

Jared Greenberg: “Did Doc Rivers explain to you why you were on the bench the last 5 minutes?”

All that said, the Clippers still did end up winning the game against Portland, even with George and fellow star Kawhi Leonard sitting during crunch time. Still, could it have been an attempt to at least lend a hand to Portland without blatantly throwing the game? Quite possibly.

Many believe that the Blazers are a real threat to upset the Lakers in the NBA Playoffs should they match up against one another, with TNT analyst Charles Barkley suggesting Portland could be a darkhorse if they reach the postseason. If this new conspiracy inside the NBA bubble has any truth to it, Sir Charles isn’t the only one who thinks that; so the Lakers may want to try and monitor how teams are scheming against them.