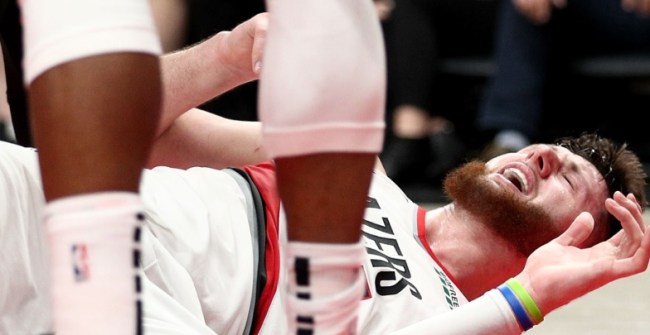 Late last night Blazers center Jusuf Nurkic suffered a devastating leg injury in double overtime against the Brooklyn Nets. *You can see the video by clicking HERE but be warned it’s very graphic).

Nurkic was later ruled out for the season after breaking both his fibia and tibia.

Blazers say Jusuf Nurkic sustained compound fractures to his left tibia and fibia. He is out for the season and no timetable has been set for his return to basketball activity.

The morning after the tragic injury many NBA fans are outraged at NBA official Tyler Ford who carelessly walked over Nurkic’s leg and made contact with his foot.

The ref accidentally kicking his broken foot as he walks by + PDX training staff being slow to get to him.

Feel awful for Nurkic.
Also, that ref is a complete dumbass! Really?! https://t.co/e5vYTNyfB6

I’m that guy who watches injury videos. They don’t bother me much.

Trust me, if you’re at all bothered by injuries, do not watch the Nurk injury. It’s really bad.

Also, fire the ref into the sun for kicking Nurks foot when he’s writhing with a broken leg.

So I just saw that Nurkic injury. How the fuck is that ref just gonna trip over dudes busted ass leg? That man has zero awareness

Hopefully the NBA addresses the issue and makes sure that refs are more careful when players are lying on the ground.