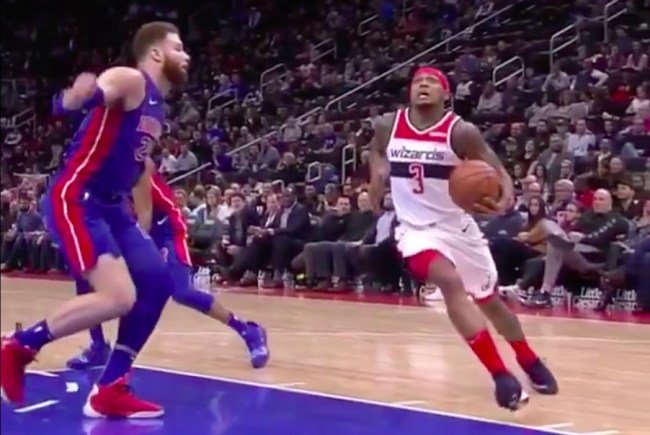 The average athlete is pretty well-versed in the art of deception, whether we’re talking about dekes, stutter-steps, no-look passes or Nathan Peterman’s mysterious ability to convince teams he’s a good quarterback.

However, deceiving opposing players and unsuspecting franchises is just part of the game. There’s also one group of people you want to be able to fool every once in a while: the officials.

Referees are only human and players have done everything in their power to come up with subtle ways to skirt the rules—like James Harden, who’s managed to perfect the art of traveling without being called for a travel.

However, some players are a tad less subtle, including the Washington Wizards’ Bradley Beal.

During the fourth quarter of last night’s game against the Pistons, Beal took a page out of the playbook of the plague victim in Monty Python and the Holy Grail by deciding to go for one of the most blatant walks I’ve ever seen.

Beal might be a guard but he does a great impression of a running back.

However, the referees apparently decided to swallow their whistle and failed to call what may be the most blatant travel these eyes have ever set sight upon.

In my experience, if you happen to make a total fool out of yourself, the best way to deal with things is either embrace your mistake or maintain radio silence until the whole thing blows over.

However, it looks like the refs in this case decided to go with the almost-always-regretable “Um, actually…” response instead of just ‘fessing up.

The offensive player gathers with his right foot on the ground. He then takes two legal steps, before losing control of the ball. After regaining possession, a player is allowed to regain his pivot foot and pass or shoot prior to that foot returning to the ground. This is legal. https://t.co/0hVqgHw3w7

Now, where did I put that GIF of Jennifer Lawrence?