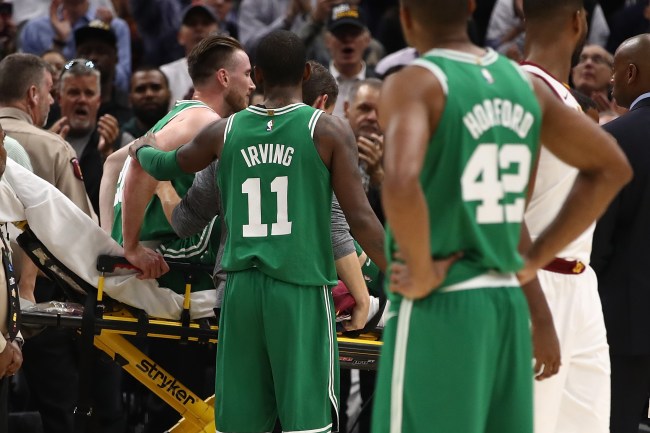 CLEVELAND, OH – OCTOBER 17: Kyrie Irving #11 of the Boston Celtics consoles Gordon Hayward #20 after Hayward was injured while playing the Cleveland Cavaliers at Quicken Loans Arena on October 17, 2017 in Cleveland, Ohio. NOTE TO USER: User expressly acknowledges and agrees that, by downloading and or using this photograph, User is consenting to the terms and conditions of the Getty Images License Agreement. (Photo by Gregory Shamus/Getty Images)” credit=” ” credit_src=”

NBA stars Kawhi Leonard (Spurs), Kyrie Irving (Celtics) and DeMarcus Cousins (Pelicans) won’t suit up for their respective teams during the 2018 post-season, due to various injuries; but, all 3 will collect paychecks as they rehabilitate. NBA contracts, which are guaranteed in full, resulted in injured players taking home more than $125 million this past season. No team spent more on inactive players, than the Boston Celtics; paying over $34 million to Gordon Hayward and Irving, as they missed a combined 103 games. Despite their absences, the Celtics managed to finish the regular season with the Eastern Conference’s 2nd best record (55-27). Coincidentally, the Western Conference’s #2 seed (58-24), the Golden State Warriors, spent the 2nd most money on injured players; spending more than $22 million on Steph Curry, Kevin Durant, Andre Iguodala and Draymond Green, as they sat out a combined 72 games.

Howie Long-Short: If $125 million sounds like a lot of money sitting on the bench, consider analysis of the 2016-2017 season; OnlineGAMBLING.ca found NBA teams paid out $305 million to injured players last season. The 76ers, who finished the ’16-17 season with the league’s 4th worst record (28-54), led the way; spending $22 million on 7 players (including $6 million on Ben Simmons) that were unavailable to take the floor. It must be noted that despite finishing with the league’s 4th worst record, the 76ers won the 2017 NBA draft lottery; earning the right to select first overall in the 2017 NBA draft. The team selected Markelle Fultz, who ironically sat out the first 68 games (taking home $5.8 million while rehabbing) of his career with a shoulder injury.

Major League Baseball and the National Basketball Association intend on divesting ownership interest in DraftKings and FanDuel, though both will continue to partner with their respective DFS partner in a commercial capacity. The decision comes as MLB and the NBA are actively lobbying for sports betting legislation entitling them to “integrity fees” (a tax on the total wagered on league games), arguing they’ll have an increased role in regulation should SCOTUS strike down PAPSA; a tough sale if also serving as the book, with a stake in winners/losers. Current valuations of the DFS operators (peaked at +/- $1 billion) and exit terms have not been disclosed.

Howie Long-Short: This news becomes the latest indication that DraftKings/FanDuel are shifting business models, pending the legalization of sports betting. MLB lawyer Bryan Seeley recently stated, “we’re not going to be part-owner of a bookmaker”; while DraftKings spokesman James Chisholm was quoted saying DFS companies are “perfectly positioned to succeed (think: 10 million users) in a legal sports betting market.” In February, the company hired a Head of Sportsbook and is reportedly in contacts with “potential casino partners.”

Attitudes towards legalized sports betting have shifted dramatically in this country, over the last 25 years, but the optics of a pro sports league acting as a gaming operator remain poor; so, no surprise seeing the MLB and the NBA disassociate with DraftKings/FanDuel prior to SCOTUS’ decision. Of course, even if the leagues aren’t successful in negotiating an integrity fee, they’ll profit on legalized sports betting through the sale of data rights.

Fan Marino: Did you know that Australians lose more money gambling ($920) annually, than citizens of any other country in the world? That figure is +/-2x more than the average U.S. adult loses per year and +/-50% more than 2nd place, Singapore. Lawmakers point to “pokies” (electronic betting machines) not limited to casinos, as the problem; with over 50% of the losses occurring on the machines. They are onto something. Woolworths Group (OTC: WOLWF, ASX: WOW), a supermarket chain, is the country’s biggest operator of “pokies”; controlling over 12,000 nationwide through a majority stake in Australian Leisure and Hospitality Group.