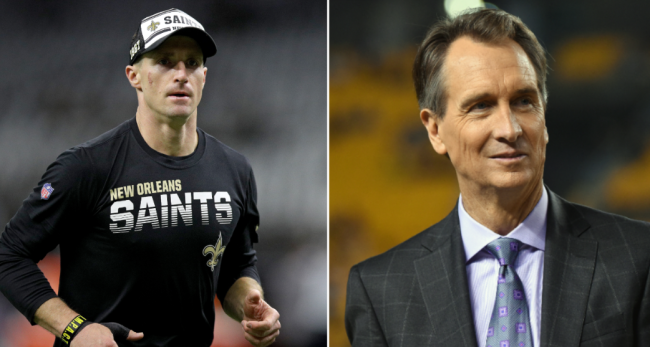 Just last week, the Saints QB announced his retirement from the NFL in an Instagram video featuring his children.

Now that Brees is done with football he can prepare for his new career as a broadcaster and if things go well next year he could see himself climbing the ladder at NBC pretty quickly.

During an appearance on Colin Cowherd’s podcast, media insider Andrew Marchand said he believed NBC is secretly planning on replacing longtime broadcaster Chris Collinsworth with Brees in the near future if the former Saints QB proves that he can handle the job.

Prepare for a potential shake-up in the SNF booth@AndrewMarchand told @ColinCowherd that NBC has a secret plan for Drew Brees pic.twitter.com/Lj3lER7mqX

“Yeah, 100 percent that’s what you should read into it,” “NBC won’t say that, but NBC is doing something smart in terms of you bring Brees in, he does Notre Dame, see if he’s good and then you can elevate him. But I think that can go pretty quickly if he is good because that’s kind of their new team, and then they can work toward that next Super Bowl with Drew Brees and Mike Tirico.”

“I got to see how Brees does. I think there’s a very good chance not this Super Bowl, next year NBC has it, but the following one four years from there that Tirico and Drew Brees would be the people.”

It is worth noting that NBC Sports executive producer Sam Flood told Jimmy Traina of Sports Illustrated that he wasn’t planning on replacing Collinsworth anytime soon despite the Brees hiring.

“Cris remains among the very best who’ve ever done it and the plan is to keep him in that chair for a long time,” “The opportunity down the road is not something we’re looking at right now.”

Marchand is pretty dead on with his reporting so I would trust him if he believes Brees could replace Collinsworth fairly soon.