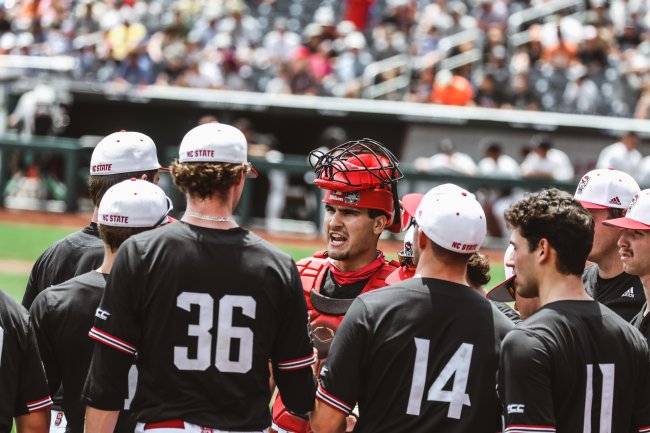 North Carolina State baseball was given two options— play the nation’s No. 4 overall seed with a 13 total players or forfeit. They chose to play.

Less than half an hour before the Wolfpack took the field for their College World Series game against Vanderbilt, the field was cleared and both pitchers were told to stop warming up.

Kumar Rocker was just told to stop warming up.

The game is on hold.

We may be looking at a forfeit in Omaha. #CWSOmaha #vandyboys

Nobody knew what was going on, but the consensus was that a player tested positive for COVID-19. That ended up being the case. An undisclosed number of N.C. State athletes were placed under COVID protocol and the game was delayed by just over an hour.

An update on today's game.

According to ESPN’s broadcast team at TD Ameritrade Park, the team was given the chance to forfeit Friday’s game or play shorthanded.

N.C. State is the Cinderella story of the college baseball postseason and was undefeated at the College World Series entering Friday. After handing Vanderbilt its only loss of the postseason 1-0 on Monday, head coach Elliott Avent said an illness was going through the team.

It is unclear whether that illness was/is COVID-19, but tests began to pop positive nonetheless.

Fortunately, the College World Series is double elimination tournament and the Wolfpack had the upper hand. If they were to win against the Commodores on Friday, they would advance to the three-game series CWS final. If they were to lose, both teams would play again in a winner-take-all game on Saturday.

Thus, if the illness-depleted Wolfpack had forfeited, they would have been able to come back and play the next day with much higher stakes. With nothing to lose, they chose to play on Friday.

The lineup did not include four starting position players and had one particularly interesting twist. Sam Highfill, who pitched (and threw a gem) against the Commodores on Monday, was starting at first base. He had not taken at-bat in 2021.

Garrett Payne was named the starting pitcher and made only his second start of the season.

Should N.C. State need to play again on Saturday, the understanding is that the Wolfpack may have the chance to clear more players.