LOOK: N.C. State’s Carnival-Themed Uniform Reveal Is The Coolest Of The Season 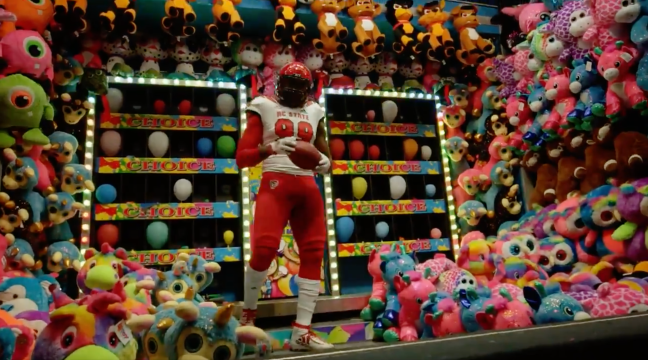 The arms race to media within college football is exponential. Every team around the country is adding more and more videographers to their staffs and placing a large emphasis on in-house content.

As such, every single thing revolving around a university’s football program has to have a content element. Whether it be team meals, or postgame recaps, having a great video team is key.

One thing that has become particularly important is uniform reveal videos. Each week, teams are going bigger with how they announce what uniforms they are going to wear for the upcoming game.

North Carolina State released their video for its upcoming game against Boston College on Thursday and it’s one of the best this season, if not of all-time. Take it from me, I have watched a lot of college uniform reveals.

The Wolfpack video team took its video to the North Carolina State fair the cinematography is awesome. The uniform itself is underwhelming, but the creativity in how it is presented is so cool.

Take a look, and make an extra note of the angles, framing and lighting:

I couldn’t find specific names for the N.C. State video team, but if you want to reach out to me (email or instagram) and let me know, I’d love to plug the people behind this awesome uniform reveal.