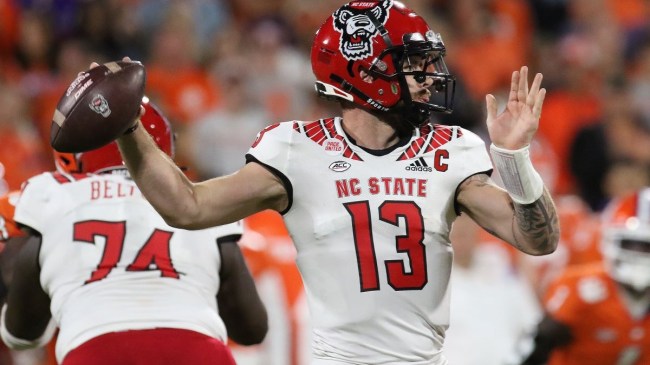 North Carolina State senior Devin Leary is one of the nation’s best quarterbacks. Leary threw for 3,433 years, 35 touchdowns and just five interceptions for the Wolfpack a year ago. This season, he’s already thrown for 1,265 yards, 11 touchdowns and four interceptions.

But that won’t be of much help to NC State on Saturday. That’s because Leary was ruled out of the Wolfpack’s top-25 showdown with undefeated Syracuse according to ESPN’s Pete Thamel.

“Leary, the ACC preseason player of the year, injured his shoulder against Florida State last week. Coach Dave Doeren has set a timetable where Leary’s return could be anywhere from a week to six weeks. For the first week, Leary is not ready to return.”

The fifth-year quarterback is one of the primary reasons fans felt NC State could challenge Clemson for the ACC Championship in 2022. Though he struggled mightily when the two teams met a week ago. The Tigers walked away 30-20 winners in that top-10 showdown and Leary completed just 28-of-47 passes for 245 yards, one touchdown and one interception.

The Wolfpack and Dave Doeren now look to senior backup Jack Chambers against the Orange. Chambers transferred in to Raleigh after spending four years at the helm of FCS Charleston Southern. Coincidentally, he made his NC State debut against the Buccaneers earlier this season when he went 5-of-11 for 45 yards and one touchdown.

Chambers’ numbers haven’t been pretty overall, however. The backup QB is just 6-of-14 for 48 yards a score in limited action this season. Though he does offer a threat with his legs.

The Wolfpack figure to have their backs against the wall against a Syracuse team that is, shockingly to some, 5-0 thus far. The Orange offense, led by QB Garrett Shrader, averaged 38.4 points per game. That ranks 24th in the nation. If they can replicate that performance, Chambers may need to have a career day.