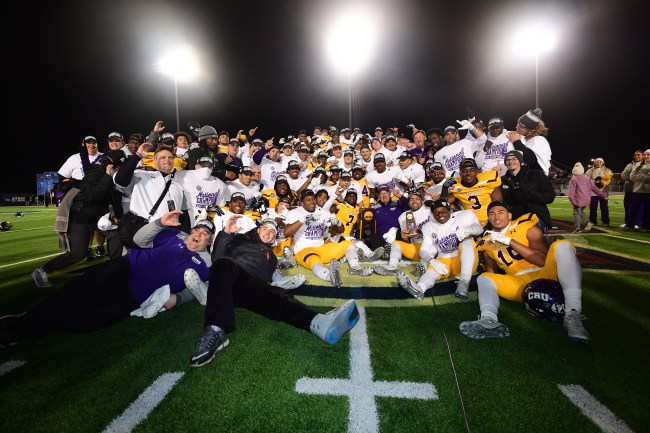 The NCAA has to be LOVING this current NBA-China controversy because fo ra brief moment the NCAA isn’t the worst organization in American sports. But this China thing will blow over by the time the NBA season starts and we’ll all go back to remembering how awful the NCAA is, how they ruthlessly profit off college football athletes (and others), and how they take every opportunity to bone players in need.

Case in point, the NCAA has vacated the 2016 D-III National Championship and stripped Mary Hardin-Baylor football in Texas of their title. The NCAA is citing ‘impermissible benefits’ as the reason for stripping the school of their national championship.

The school self-reported the infractions and self-imposed a punishment. Were those benefits impermissible? I’ll let you be the judge of that after you read what led the NCAA to strip the team of its title, suspend the head coach, accept a fine, and more.

Texas Football has the story:

The infractions occurred when head coach Pete Fredenburg loaned his 2006 Subaru to student-athletes. One player was allowed to use the car for 18 months during the 2016 and 2017 seasons, according to the Associated Press. On another occasion, Fredenburg loaned the car to another student, but it broke down within an hour and was towed.

Additionally, the same player was given unidentified “impermissible transportation” while the player was a prospect.

In the coach’s defense, it’s pretty fucking easy to misread a rule about ‘impermissible benefits’ to cover lending a friend your car when they’re in need. I lived in a house in my sophomore year in Tallahassee at FSU where there were six of us in the house and only 4 of us had cars.

The two roommates that didn’t would borrow my car almost once a day and I’d never think twice about it. They weren’t athletes but it’s just such a small gesture that it wouldn’t ever cross a normal person’s mind as ‘impermissible’ under any circumstances.

The school says they will appeal the NCAA’s decision to vacate their 2016 National Championship. Regardless of that appeal’s decision, I think the school should claim it in the same way a handful of SEC schools claim Nattys from a hundred years ago that never happened. At least this team won that title before it was stripped.

The coach told reporters he thought he’d done nothing wrong:

“I have a passion to help youngsters,” Fredenburg told reporters. “He desperately needed some help. I felt like I was okay with the interpretation of the rules. I had an old car that was in my driveway and I loaned it to him.”

UMHB previously self-imposed a two-year probation period, enhanced compliance training and a $2,500 fine. Fredenburg received a three-month suspension without pay and a three-game suspension, which was served in 2018. The NCAA accepted the self-imposed punishments, but levied the additional forfeits. (via)

The UMHB President, Randy O’Rear, is backing his coach and the school’s actions against the NCAA. He believes the NCAA has zero business ADDING to the school’s self-imposed punishments and he’s 100% correct.

They stripped the school of a National Championship because a kid drove a fucking car!?!? Who are they kidding with this???

“Although the university recognized the seriousness of the violations it has self-reported, it respectfully disagreed with the Committee on Infractions decision to add to our self-imposed sanctions the vacating of wins and records for the 2016 and 2017 football seasons,” said UMHB president Randy O’Rear. (via)

Imagine this happening at the D-1 level. Alabama getting stripped of a title and wins because a player drove a car. You can’t imagine that because it would never happen in a million years.

This school’s getting F’d in the A because they’re a D-III team, plain and simple.

For more on this story, you can click here to visit Texas Football.