I don’t have the numbers to back this up, but I can only assume that more than a few urologists received some phone calls around this time last year from men who made the decision to push off the vasectomy they’d scheduled in the hopes they’d be able to spend the first couple of days of March Madness chilling on the couch while using a bag of frozen vegetables to chill their family jewels.

The NCAA Tournament may look a bit different this year, but on the bright side, it will be much easier for fans to get away with cracking open a beer at noon when the action officially kicks on March 18th when you consider the vast majority of them will probably be watching the games while working from home.

Next week will also mark the return of #VasectomySZN, and according to Yahoo, the Virginia Urology Center decided it would try to drum up some business earlier this year when it filed a trademark for “Vasectomy Mayhem” to advertise the special it was offering to coincide with the start of March Madness.

However, that motion managed to catch the attention of the NCAA, which has apparently filed a petition in an attempt to stop the application from being approved in which the governing body of college sports claims the phrase is “confusingly similar” to the “March Mayhem” moniker it owns the rights to, arguing it could leave people to believe they’re somehow connected with the clinic that specializes in going snip-snap snip-snap.

The NCAA is petitioning to cancel a urology center's registered trademark for VASECTOMY MAYHEM, claiming that it's confusingly similar to NCAA marks like MARCH MAYHEM.

You have to be a pretty cocky lawyer to attach your name to something like this.
(h/t @Bill__Donahue) pic.twitter.com/GFby7pY2BM

The filing includes a screenshot of the phrase being used on the center’s website, although it’s worth noting the article in question was published in 2011. 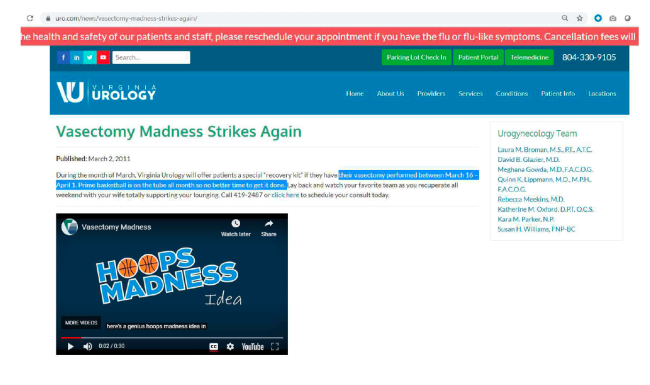 The NCAA has also filed a couple of trademarks of its own over the past year as it geared up for the return of March Madness, as it hinted at what this year’s tournament could look like when it laid claim to “Battle in the Bubble” over the summer before adding “Mask Madness” to its portfolio in December.

Given the NCAA’s history of making as much money as possible on the back of unpaid athletes while making sure no one else gets a piece of the pie, this shouldn’t come as much of a surprise. With that said, it seems like they’re missing out on a great opportunity to rake in even more dough by declining to find a sponsor willing to become its Official Vasectomizer.