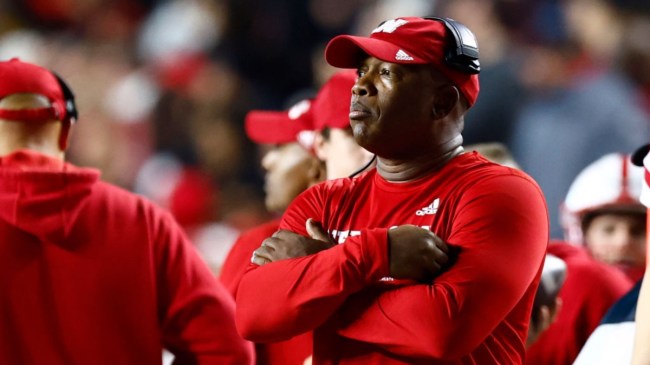 It has been a tumultuous year for the Nebraska football program. They lost 2 of their first 3 games of the year under Scott Frost, including a shocking home loss to Georgia Southern. Then they fired Frost to try and get the program headed back in the right direction.

After his firing, the team was demolished at home by Oklahoma. They bounced back with wins over Rutgers and Indiana before losing to Purdue in a competitive game this past weekend.

When Frost was fired, Mickey Joseph stepped up as the interim coach for the Cornhuskers. It’s his first time working as a head coach in college football and it seems that first job is coming with some lessons to learn.

Today, Joseph was giving a press conference when he made an error you don’t usually see from coaches.

During the press conference, he was asked about Malachi Coleman, a 4-star recruit who recently made a verbal commitment to Nebraska.

Joseph confirmed that the Cornhuskers had landed Coleman after he had said 6 months ago that he wouldn’t play for Nebraska. Unfortunately, coaches can’t talk about recruits until they sign their letter of intent, which Coleman can’t do until December 21st.

The first day Malachi Coleman can sign his letter of intent is Dec. 21. NCAA rules prohibit coaches from commenting on an unsigned prospect. https://t.co/6TLz62HYiD

Considering how the NCAA usually handles recruiting violations that actually matter, it seems unlikely that much will come from this. However, it’s definitely something Mickey Joseph should be more careful about in the future, especially if Nebraska decides to keep him as their coach beyond this season.

At least Nebraska shouldn’t have to worry about any more random recruiting violations popping up after this.