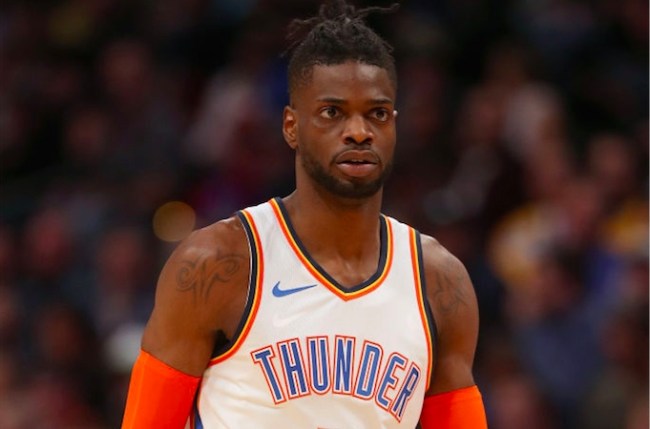 A scary incident occurred in last night’s Thunder/Timberwolves game, as OKC center Nerlens Noel was carted off in a stretcher midway through the third quarter.

Noel stepped up to contest a dunk attempt by Timberwolves forward Andrew Wiggins when he got drilled with an inadvertent elbow to the face, which sent him to the floor with no whereabouts to break his fall.

According to ESPN, the 24-year-old was taken to OU Medical Center and held overnight and an update on his condition is expected to come Wednesday. According to Fox Sports’ Daniel Beyer, doctors yelled “keep your eyes open” to Noel and later carried him off the court on a stretcher.

Thoughts out to Nerlens Noel. His head smacked the ground very hard after trying to block a Andrew Wiggins dunk attempt. He left the game on a stretcher.pic.twitter.com/OLtkzQuJWs

Shortly after Noel was carted off the floor, Thunder guard Dennis Schroder and Wolves guard Jeff Teague engaged in a brouhaha that resulted in a technical for Schroder and double technicals and an ejection for Teague. Schroder was reportedly enraged with Wolves players who he believed were snickering and talking amongst themselves while Noel lay lifeless on the floor. Schroder stared at the Wolves players and yelled in their direction, “What are you laughing at?”

After the game, Wiggins wished Noel a speedy recovery and emphasized his role was entirely accidental.

“I just tried to make an aggressive move and dunk,” Wiggins said. “He tried to contest it. I think he fell wrong. I didn’t really see it until I saw him on the ground. Hopefully he’s good. I hope nothing but the best for him. I hope he gets healthy soon and comes back stronger.”

My prayers out to you 🙏🏾 @NerlensNoel3

After the game, the basketball world tweeted its support for Noel.

The game is IRRELEVANT…pray for Nerlens Noel’s health!! 🙏🏾

Hoping Nerlens Noel is OK. Took an elbow in the forehead from a driving Wiggins, then his head hit the floor hard as he fell. Being stretchered off. Very scary.

Nothing worse than when a player hits they're head. Hoping Nerlens Noel is ok. One of the scarier falls I've seen.