Nets Set To Admit That Kyrie And KD Are Too Big Of A Headache, ‘Prepared To Lose Both Rather Than Go Through Repeat Of Last Season’ 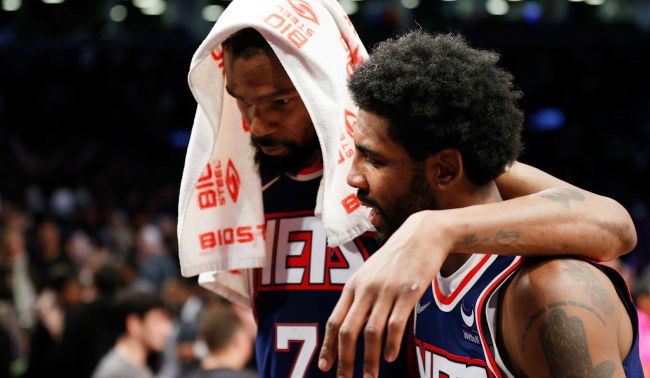 With increasing rumors that Kyrie Irving is looking for a way out of Brooklyn (surprise, surprise!) and that Kevin Durant — forever the follower — could possibly follow his lead out of town, a new report from ESPN’s Brian Windhorst indicates that the franchise is “prepared” to both stars.

Perhaps more shocking than the news of the Nets being prepared to lose both Kyrie and KD is the part of the report that indicates they’d almost be glad to, as Windhorst states that the organization would rather see the duo move on than “go through what they went through last season.”

The Nets are prepared to lose both Kyrie Irving and Kevin Durant, per @WindhorstESPN

Brooklyn would rather lose both stars 'than go through what they went through last season’ pic.twitter.com/xetUG4Tk1V

Windhorst’s claim about the Nets’ apparent thinking comes just hours after it was reported that the Nets have given the 30-year-old Irving to seek a trade.

If both Irving and Durant do leave the borough of Brooklyn this summer, it’ll mark a truly hilarious end to one of the most pitiful “Big 3” attempts in NBA history, as the trio of Kyrie, KD, and James Harden ultimately played just 16 games together over the course of multiple seasons. To be fair, though, the team did have a wildly impressive 13-3 record in those games.

Whether it be ego, injury, or both, the Brooklyn Nets never dominated the NBA — let alone the Eastern Conference — the way the franchise likely thought it would back when it acquired the three generational stars.