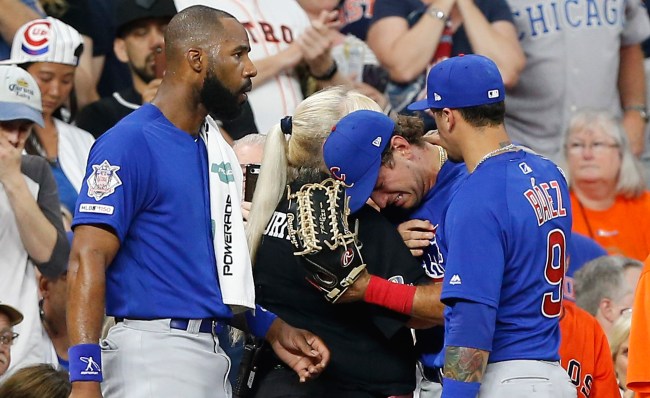 During his at-bat in the top of the fourth inning Wednesday night, Chicago Cubs outfielder Albert Almora Jr. did something that happens all the time in baseball: he pulled a ball foul into the stands on the third base side of the field.

Almora watched the whole thing unfold in front of him as the child was was rushed up the aisle and taken away in an ambulance, causing him to, understandably, be very visibly shaken.

Almora, a father of two, appeared to be in tears as he resumed his at-bat, eventually striking out and heading back to the bench in an emotional daze.

At the end of the half-inning, Almora went into the stands to the area the girl was sitting and was so emotional the security guard in that section had to console him.

After the game, Almora was asked about the incident and said, “As soon as I hit it, the first person I locked eyes on was her. Right now I’m just praying and I’m speechless. I’m at a loss of words, being a father, two boys … God willing I’ll be able to have a relationship with this little girl for the rest of my life. But just prayers right now and that’s all I really can control. Right now obviously I want to put a net around the whole stadium.”

Following the awful incident with a child getting hit by a ball in the Cubs-Astros game, Kris Bryant was unequivocal, telling ESPN that Major League Baseball needs to extend netting further down the lines to prevent hard-hit balls rocketing into the stands and injuring fans.

As did teammate Jason Heyward, who said, “People don’t realize how hard it is to react to a baseball. We go through that. I know they don’t get it, but it’s that hard to react to it. So it would help people. But we know we can’t control it. Stadiums know they can’t necessarily control how fast the game is. But if there’s anything they can do, I guess that would be it. I’m not the stadium police, but I don’t know any other way to stop that from happening.”

Reportedly, the girl was alert and conscious and is expected to be okay.

According to our sources, the young child was awake, responsive and taken to a local hospital for precautionary reasons. The child is expected to be ok. Thank goodness.

What makes the whole matter worse is that it is so unnecessary, as evidenced by a report by Ken Rosenthal of Fox Sports back in 2015.

The players, in each of the last two rounds of collective bargaining, proposed that protective netting extend down the foul lines and even to the foul poles, according to major-league sources.

The owners, however, rejected the proposals for the 2007 and 2012 labor agreements, citing concerns that additional netting would detract from the experience of ticket buyers in certain premium seats, sources said.

“Some owners are afraid to upset the fans that pay some of the highest ticket prices, when in reality, it’s an effort to protect those very fans,” said Diamondbacks reliever Brad Ziegler, a member of the negotiating committee for the players’ union.

“(The owners) seem afraid that fans will lose access to the players – autographs, getting baseballs, etc. — and that will cause those ticket holders to be unhappy. Or, that they’d have to watch the game through a net. (But) fans behind home plate pay the highest prices, have the same issues, and yet those seats are always full.”

If you’ve ever been to a professional baseball game you know three things to be true. (1) It is impossible to be looking at the batter 100 percent of the time, (2) even if you could not many people have the reactions to be able to stop the hardest hit line drives from hitting someone, and (3) it takes about 20 seconds to get used to watching the game from behind a net.

NHL fans have gotten used to the added netting at hockey games since the death of 13-year-old Brittanie Cecil in 2002. Does baseball really want to wait until someone dies as a result of a foul ball to make their changes?