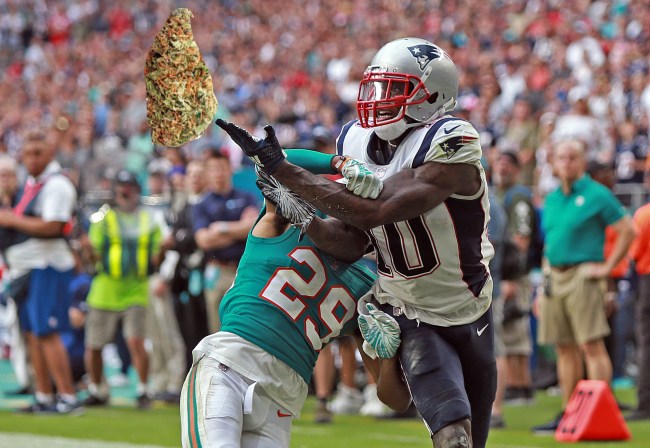 Future generations of football fans will look back on the league suspending players for weed with the same bewilderment we view players in the 60s ripping heaters on the sideline mid-game.

50 years ago today, Len Dawson did this. pic.twitter.com/ejqm8ZrAGQ

They will look at us as the old man in the rocking chair with a gun and a warm 40 ounce. Uncivilized. Unenlightened. Unevolved.

The new CBA proposal may bring us up with the times and allow players to do as they please when they are not risking their lives between the endzones.

If at least 50 percent plus one of the dues-paying members of the NFL Players Association vote in favor of the proposed CBA, no player will be suspended during the next decade for testing positive for marijuana or any other substance of abuse.

The 2020 substance-abuse policy, a link to which has been distributed to all players eligible to vote via email from NFLPA general counsel Tom DePaso, removes all suspensions for positive tests. Instead, players will be subject to fines only for a positive drug test.

Players in stage one of the program who test positive face no penalty at all, other than being advanced to stage two. In stage two, positive tests result only in fines.

This news has to be music to the ears of Josh Gordon, who’s been suspended eight times in his NFL career and none of them involve a violent crime. The dude missed two full seasons in 2015 and 2016, his would-be prime.

josh gordon lost millions cause of this… nfl should pay him https://t.co/XUZZRySECT

A part of me refuses to revel in another man’s issues with substance abuse, but a bigger part of me recognizes that funny is funny. And these reactions are funny.

NFL: We are no longer suspending players for positive marijuana tests

Josh Gordon before showing up to his next practice pic.twitter.com/ntVXxY8JaD

Josh Gordon showing up to training camp after signing with a new team pic.twitter.com/75DeTuyBdt

Josh Gordon looking at Rodger goodell and the nfl for costing him millions now that they don’t suspend for positive drug tests pic.twitter.com/htPjeJXvpZ

It’s only a matter of time before the NFL hires licensed blunt rollers on the sidelines like the smelling salt dudes. Get okay with this concept. You don’t want to be on the wrong side of history.