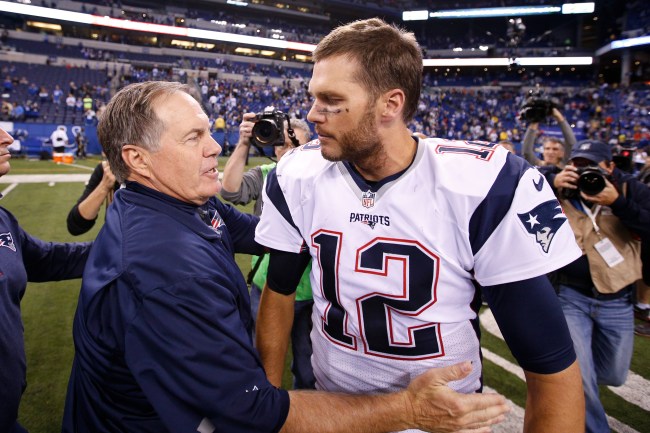 The New England Patriots are the best dynasty in sports history; don’t @ me. As much as it kills me to say that, the fact that quarterback Tom Brady and head coach Bill Belichick have gone to nine Super Bowls in 18 seasons together, winning five (so far), it’s clear that the Pats are the gold standard when it comes to sports franchises in any sport.

And one of the things they do really, really well is stay tight-lipped about issues that may occur in-house, so to speak. So when an ESPN report surfaced last year that there was friction between Brady, Belichick and New England Patriots owner Robert Kraft over, allegedly, backup quarterback Jimmy Garoppolo being traded or not, people began to wonder if it was finally the beginning of the end for the team.

Well, it wasn’t, as the Pats (once again) went to the Super Bowl last year; albeit, they lost to the Philadelphia Eagles.

Still, even today, many wonder if there’s friction between Brady and his head coach, with many thinking that fatigue will set in and they’ll just crumble to pieces before our very eyes. That may very well happen at some point, but, until it does, former NFL linebacker James Harrison — who played with the New England Patriots last season — says he thinks any news that tension is happening internally is all a set up. No, like seriously, he thinks the organization is behind it all, making up rumors to help motivate Brady and Belichick.

Talking to WEEI’s “Ordway, Merloni and Fauria” this afternoon, take a look at what James Harrison’s theory is about that report of friction that was reported last season, per NESN:

“I didn’t have any preset notions,” Harrison said of coming into the Patriots organization. “The only thing I had at that time was (the media) were saying there was a rift between Tom Brady and the ownership and Bill Belichick, and I’m like ‘alright I’m going to get here and I’m going to see some dirt.’”

Then Harrison dropped this.

“They make up stories to bring them boys closer together, I promise you.”

Wait, they make up stories?

“Yes,” Harrison said. “Everybody makes up stories — they may make it up to get somebody to make it up, like it’s crazy. I swear, I was there dude, I didn’t see not one — I’m talking about holding meetings, conversations with him, I’m looking like ‘damn, are they cussing at each other, they fussing at each other?’ No. Like literally when they say it’s New England versus everybody, you believe that. I was there four, six weeks, and by week two I really believed, I’m telling you in my honest heart and soul, it was us versus everybody. Everybody hated us. And I was there for six weeks.”

Harrison then doubled down on his stance.

“Dude, somebody developed something to create something. They’ve got somebody that’s leaking fake information and (the media) think that they’re getting a firsthand (scoop).”

Uh, that’s quite the claim from Harrison. But, if there’s any team in sports that would be conniving enough to do something like that, it’s definitely the New England Patriots.

While James Harrison insists that the Pats have a designated source who makes up bullsh*t for the media to write about, we may never know the real truth behind that unless we’re part of the club that’s inside the organization. It definitely does make you wonder if it’s true, though, doesn’t it?