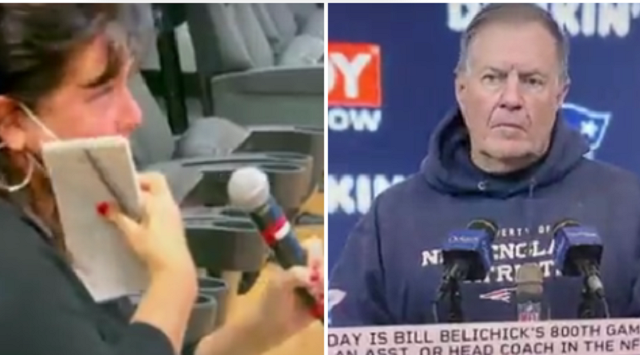 The New England Patriots lost a huge divisional game against the Buffalo Bills weeks before the end of the season, but one reporter didn’t care about any of that and had other things in mind.

After the Pats’ loss on Sunday, one Boston area reporter had the guts to ask an already fuming Bill Belichick if he had any New Year’s resolutions.

After 10 seconds of silence and death stares, this reporter asked Bill Belichick about his possible NEW YEAR’S RESOLUTIONS pic.twitter.com/P8sF6XHcCJ

Despite getting brushed off by Belichick, the reporter kept asking Patriots players about their New Year’s resolutions without much luck.

This reporter won’t stop until a Patriots answers her question about New Year’s Resolutions. 😂 pic.twitter.com/SXB1g2j2kE

Earlier this week Belichick apologized to the media for his short answers during press conferences.

Bill Belichick was set to take questions to open his Monday videoconference, but instead opened with an apology on his post-game press conference. To reporters, he says: “It’s not your fault.” pic.twitter.com/xRskFZUPYw

Maybe Belichick is due for another apology on Monday,