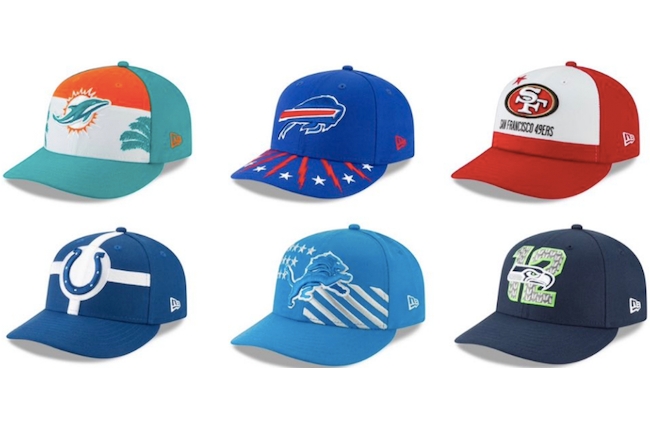 We’re just a few weeks away from the NFL Draft, a night where people who’ve played football for free their entire lives will see everything change in an instant when they hear Roger Goodell call their name.

Once they take the stage, they’ll be gifted some swag in the form of a sparkling new jersey and a hat bearing the emblem of their new team courtesy of New Era, which has been tasked with designing the complimentary lids for this year’s draft.

On Tuesday, the company released the hats that players will be sporting after getting picked up and, well, they’re certainly something.

New Era takes its biggest risk yet on its NFL deal with this year’s draft hats. A mix of great and horrible. Here’s a sampling… pic.twitter.com/epxV4COVQn

It’s safe to say people aren’t exactly digging the designs based on the reactions I’ve seen so far.

New Era making sure that #Steelers fans save their money come draft time by producing a special hat so hideous that no one in their right minds would want to buy one … pic.twitter.com/ABc7LJsOkF

Most of these stink holy crap. https://t.co/o7U38OQm7S

I think "New" Era needs to rethink the name of their company. https://t.co/0XYoviaZ75

New Era clearly drove around the country purchasing off-brand football team hats, and are now selling them as their own. No other excuse for these monstrosities pic.twitter.com/TzsErGBYq4

New Era director of football Ryan DiNunzio spoke with Sports Illustrated to explain the inspiration behind the new designs, saying:

“This idea as we go through to celebrate the past of the NFL and innovation of where it’s moving, we really wanted to start with where the game began within each local community.

It’s a unique way to say this is where we started, this is who we are, this is what we’re about, this is the community we represent.

At the same time, it tells a separate story of welcoming a new member into that community. Really trying to tell this message of this is where we’re going, this is who we represent and welcome into the community.​”

However, If these somehow tickle your fancy, you can pick them up here.