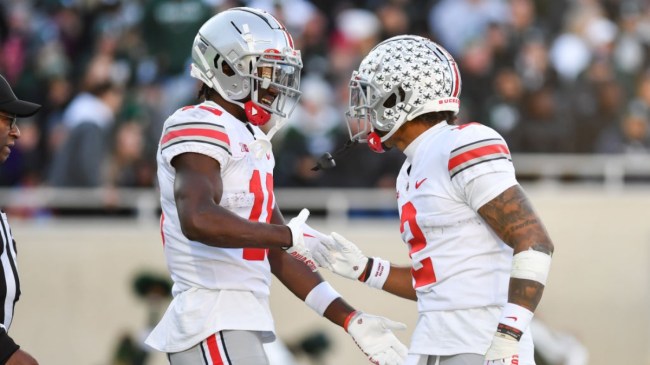 Since the start of last season, there have been 2 teams that have clearly stood out from the rest of college football as contenders to win a National Championship. Those two teams, Alabama and Georgia, met in the title game last year.

This year, fans have been expecting more of the same as both teams remain undefeated halfway through the regular season. However, there is a new team that is entering the conversation as a contender for the National Title. In fact, they’re the new betting favorite to win it all this year.

That team is Ohio State.

For the first time in nearly two years, a team other than Georgia or Alabama is the consensus favorite to win the national title. #Buckeyeshttps://t.co/TNL7sWX24H

The Buckeyes have put together a strong start to their 2022 season. After struggling to get past Notre Dame in Week 1, they haven’t even allowed the rest of their opponents to compete. Their closest game against their last 5 opponents came in a 29-point win on the road against Michigan State.

However, the biggest factor in them becoming the favorite likely doesn’t actually have much to do with Ohio State. The reality is that Ohio State is likely now ahead of Georgia and Alabama in the betting odds because they are perceived as being so far ahead of the rest of their conference.

They haven’t broken a sweat in 3 conference games so far. They are projected as sizable favorites against Michigan, the biggest threat to them winning the Big 10, when they play at the end of the regular seasons. They will also be expected to beat Penn State, the only other ranked opponent left on their schedule, when they meet at the end of the month.

Meanwhile, Alabama and Georgia both still have games remaining against Tennessee and Mississippi State. Alabama also has to head to Ole Miss for a game and Georgia still has to head to Kentucky. After all of that, the 2 would likely be headed for a matchup against each other in the SEC Championship Game.

It’s that difficult path through the SEC combined with Ohio State showing they belong in the same tier as Alabama and Georgia that currently has them as the favorite to win the National Title.