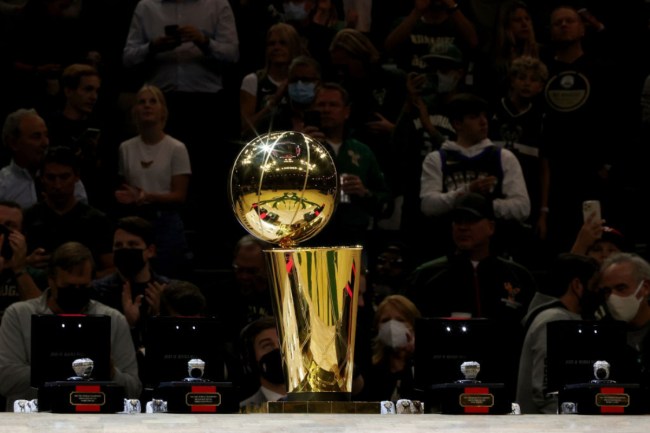 Celebrating its 75th season this year, the NBA decided to make some changes to its various awards, and even created an all-new trophy for Conference Finals MVPs.

The six trophies were designed in collaboration with artist Victor Solomon and Tiffany & Co. They’re each named after NBA legends who “helped shape the league and represent the standards of postseason excellence,” according to the league.

The Larry O’Brien trophy, the league’s championship trophy, got a bit of a facelift. The net and ball configuration has been shifted forward, to symbolize the league looking ahead to the future. Plus, starting this year, the name of each NBA champion will be etched on the bottom of the trophy, among other changes.

The new Larry O’Brien trophy isn’t the one that has caught people’s attention, however, it’s the newly introduced Conference Finals MVP trophies that are getting a reaction from fans.

I’m… not sure how to feel about this. https://t.co/OmG3iYuOVE

Ofc they introduced this trophy when Lebron isn’t at his peak…
Imagine Lebrons resume with 12 ECF/WCF MVP trophies 😂 https://t.co/w1dqn1BA8J

Looks like two bugs are facing each other inside the basketballs. A+ https://t.co/x2tV0OtGr3

Should be Bron & Kobe but 🤷🏾‍♂️ https://t.co/HgUpsqyeQp

Okay so what trophy are they putting Michael Jordan's name on? https://t.co/TaK8vjgTJc pic.twitter.com/leVWrPuItz