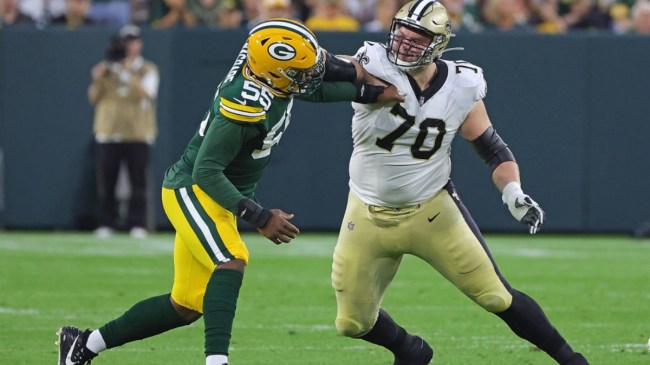 With just a couple of weeks until their first regular season game, the Saints learned today that they will be without a key piece of their offensive line.

According to NFL insider Ian Rapoport, rookie offensive tackle Trevor Penning will have to undergo surgery after suffering a torn ligament in his foot.

Trevor Penning had been grabbing headlines throughout the early portions of Saints camp. Those headlines were mostly the result of fights in training camp.

Rookie offensive lineman Trevor Penning continues to make friends with the #Saints defense. First he got into with J.T. Gray, then it was Scott Pachan. pic.twitter.com/BkqpRb08Wd

One of those fights even led to Penning being kicked out of practice.

Penning was expected to immediately be an important part of the Saints’ offensive line after being selected 19th overall this year. The Saints have a major hole to fill on the left side of their line after Terron Armstead left for the Miami Dolphins this offseason.

Penning also isn’t the first injury at the position for the Saints this preseason. James Hurst was injured last week, leaving the Saints very thin at left tackle at the moment.

It’s an unfortunate situation for the New Orleans Saints as the regular season quickly approaches.