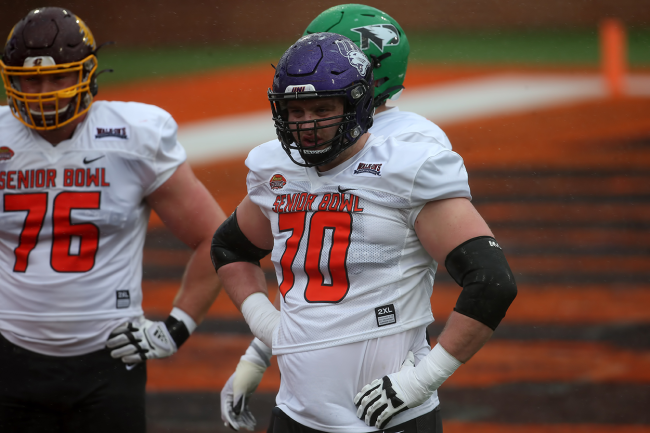 With the No. 19 overall pick in the 2022 NFL Draft, the New Orleans Saints selected Trevor Penning out of Northern Iowa. Penning, a 6-foot-7, 329-pound offensive tackle, quickly rose up the draft boards last fall and during the pre-draft process with his significant size, strength, and tenacity.

Although there is a lot of room for the 23-year-old to develop, his high-ceiling potential and mold-ability is something that drew the Saints into drafting him. He is a freak athlete for his size.

In addition to his raw athleticism, Penning is vicious. He plays through – if not beyond — the whistle and is known for his tenacity. In some instances, the hard-nosed, no-nonsense mentality gets him in trouble. Penning has been involved in quite a few dust-ups throughout his college career and during the pre-draft all-star events.

That continues to be the case at training camp.

Trevor Penning is not making friends with the members of the New Orleans defense.

Earlier this week, on the first day that the team was in full pads, Penning got into it with 2021 first round pick Peyton Turner and the two exchanged a few punches before the fight was broken up. It was not just a push or a shove, they were throwing hands.

Penning was back at it again on Tuesday. After punching down on the defensive lineman, the rookie tackle moved to the second level and got his hands on safety J.T. Gray. It was probably holding and it pissed Gray off, so the two got into it after the play. It was quickly broken up.

Not long thereafter, Penning locked on to defensive end Scott Patchan and the two went at it all of the way to the turf. The latter may actually have won that round.

Rookie offensive lineman Trevor Penning continues to make friends with the #Saints defense. First he got into with J.T. Gray, then it was Scott Pachan. pic.twitter.com/BkqpRb08Wd

On Wednesday, after getting into it on Monday and Tuesday, Penning was kicked out of practice for his involvement another brawl.

Clearly, Penning is not toning things down in the NFL. He is an undeniable pest who will surely get under the skin of many defenders throughout his career and it has worked well for him thus far, but it might be time to tone it down just a little bit.