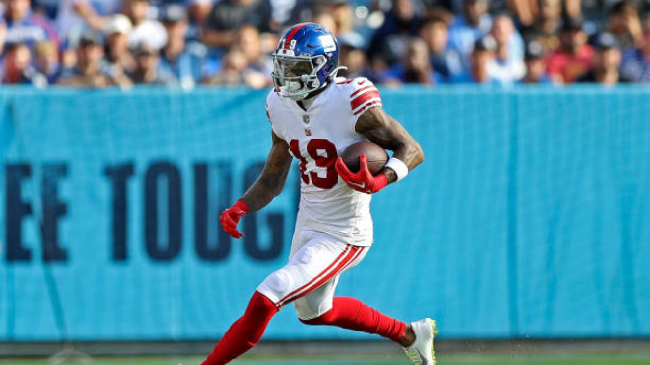 They went on the road in Week 1 and pulled off a shocking upset over the Tennessee Titans, who had the AFC’s best record last year. They followed that up in Week 2 by winning another close game against the Carolina Panthers.

As 1 of 6 teams remaining in the NFL who has yet to suffer a loss and a very believable path to a 4-0 start, things are going pretty well in East Rutherford.

Unfortunately, amid the recent success, they are still dealing with one major issue that last year’s front office left them with. Kenny Golladay is still being paid a ton of money to play for the New York Giants.

The new regime tried to change that in Week 2. They just didn’t play Golladay. He was only in the game for 2 snaps in the win against the Panthers.

Unsurprisingly, the disappointing wide receiver is not happy about this development. Today, he spoke about his benching.

Kenny Golladay reacts to being benched by the New York Giants

“I should be playing regardless … That’s a fact.” – #Giants WR Kenny Golladay

The reality of the matter is that Golladay probably shouldn’t be playing at this point. He wasn’t good at all last season, averaging 37.2 yards per game and failing to find the end zone a single time for his new team.

He hasn’t shown any improvement this season. He didn’t play well in the preseason. His route-running doesn’t look good in practice. In Week 1, he had 2 catches for 22 yards.

The Giants have plenty of other options. Sterling Shepard is playing well to start the year. Richie James has come from nowhere and become the team’s leading receiver. They barely even have snaps for Darius Slayton and Kadarius Toney, who fans would prefer to see on the field instead of Golladay.

Luckily for Giants fans, it has become abundantly clear that this situation will end with Kenny Golladay no longer on the Giants roster. Unfortunately, they’re just going to have to wait until June 1 so the Giants don’t take a big dead cap hit to get rid of him.