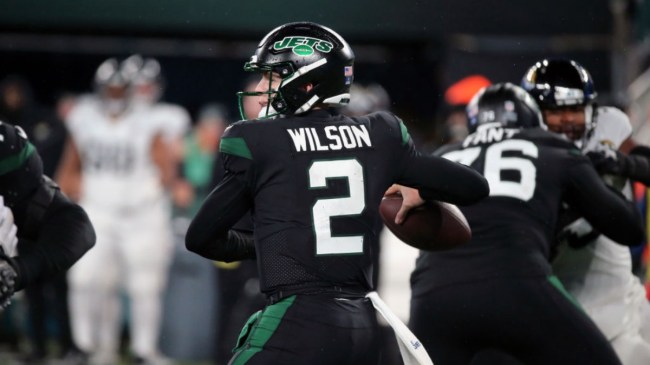 The first two years of Zach Wilson’s NFL career have been an absolute disaster.

The New York Jets spent the number 2 overall pick on him in the 2021 NFL Draft and he hasn’t lived up the expectations that come with that pick at all.

In his rookie season, Wilson complete just 55.6% of his pass attempts and only threw for 9 touchdowns while also being intercepted 11 times.

The following offseason, the Jets went out and got pieces to make things easier for Wilson and the offense. They spent early draft picks on wide receiver Garrett Wilson and running back Breece Hall.

Wilson continued to struggle this year and was eventually benched after an awful performance in a 10-3 loss to the New England Patriots.

According to The Athletic’s Zack Blatt, the Jets locker room “rejoiced” when that decision was made.

The Jets were winning but as Zach Wilson got worse, frustration mounted. WRs openly grumbled. Mike LaFleur yearned for a different QB.

Then it fell apart, a once promising season ending in disappointment.

Inside a failed QB + OC marriage and the fallout: https://t.co/I3Ubge4Td6

It is going to be really difficult for the Jets to stick with Wilson for next season.

He hasn’t played well at all in his first 2 years and has clearly lost the locker room if the team was excited about him being benched for a QB who didn’t make his first NFL appearance until his 4th season in the league.

With the team’s 1st round pick coming outside of the top 10, they’ll need to find their next QB elsewhere.

Luckily, there are some solid veteran QBs that are expected to be available this offseason.

With the current state of their quarterback room, the New York Jets will need to go after one o those QBs if they are going to make a playoff push next season.