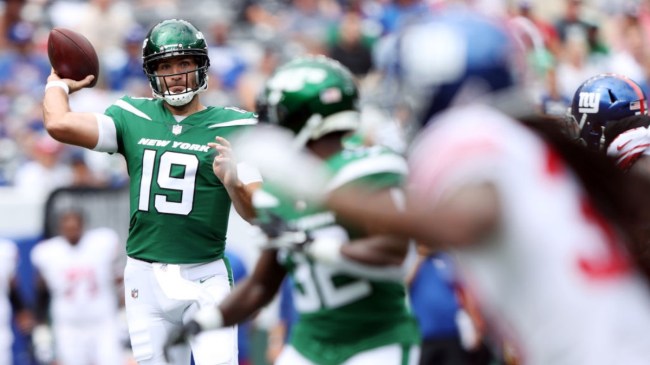 It looks like New York Jets fans are going to have to wait a bit longer than expected to see what improvements Zach Wilson has made from his rookie year with the team.

When Wilson left the Jets’ preseason matchup against the Eagles with a non-contact knee injury, fans feared the worst. Luckily, the injury didn’t end up being anything that would cost him his 2nd year in the league, but there were still questions about whether he would be ready at the start of the season.

Today, fans got an answer on Wilson’s availability. According to NFL insider Ian Rapoport, Joe Flacco will be starting the team’s Week 1 game against the Baltimore Ravens.

Sources: The #Jets are starting QB Joe Flacco on Sunday vs. the #Ravens, as Flacco is set to face his old team. Zach Wilson (knee) is progressing well, but not quite ready. pic.twitter.com/NET7CiF1Om

Shortly after that report, it was revealed that Jets head coach Robert Saleh said Wilson won’t play until at least Week 4.

So that's big news: Wilson won't play until Week 4 "at the earliest," per Saleh. Saleh wants his QB to be at his best physically and mentally before playing him. #Jets

This is a tough blow for the 2nd year quarterback, who comes into the season looking to bounce back from a very disappointing rookie year.

Flacco now gets to take on the Ravens in Week 1 for the first time since they replaced him with Lamar Jackson and will also be expected to get the start at the Browns and at home against the Cincinnati Bengals.

Hopefully Wilson will actually be able to return for Week 4 against the Steelers and Jets fans will be able to see what their former number 2 overall pick has to offer in his 2nd season.