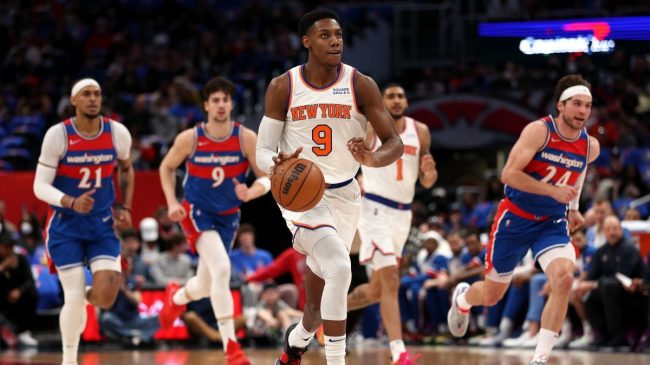 The New York Knicks have been considered the eventual destination of Utah Jazz star Donovan Mitchell for a number of months. Mitchell is a New York native and the Jazz have engaged with the Knicks for months over a trade that would continue their ongoing rebuild.

Now you can throw that all out the window.

New York brought the NBA world to a halt late Monday night when it agreed to a four-year, $120 rookie max extension with Duke product RJ Barrett.

The Knicks drafted Barrett with the No. 3 overall pick in the 2019 NBA Draft and he’s grown into one of the team’s most valuable players. In 2021-22, Barrett was second on the team in scoring a 20.0 points per game to go along with 5.8 rebounds and 3.0 assists.

The deal makes Barrett the youngest player in Knicks’ history to eclipse $100 million and also puts a temporary halt to any potential Mitchell trade.

Barrett’s extension – which makes him the youngest $100M player in Knicks history at 22 — ends weeks of New York/Utah trade talks on Mitchell, and forces teams to start discussions over with significantly different deal parameters because of the Poison Pill provision.

Barrett’s extension ends a remarkable 23-year drought for the Knicks: He’s the franchise’s first draft pick to agree to a multi-year contract extension after his rookie deal since Charlie Ward in 1999.

New York’s Leon Rose set a Monday night deadline with Utah to reach an agreement on a trade for Mitchell – or the Knicks would commit to the Barrett extension, sources said. Knicks, Jazz closed gap on deal points in recent days on a Mitchell trade, but neither would go further.

ESPN’s Adrian Wojnarowski further explained why the contract makes a Mitchell deal so much more different.

Once the Knicks committed to Barrett’s extension, management became resigned to the fact that there’s a much more difficult path to an offseason deal to acquire Mitchell. Nevertheless, neither Utah nor New York is ruling out restarting the talks before the start of training camps in late September, sources said.

The sides have been discussing a trade on and off since early July. Out of the 179 players in NBA history who’ve had the poison pill provision, only one — Devin Harris in 2008 — was moved.

The contract provision makes the odds of a deal for Mitchell far less likely.

The Jazz may opt to pursue trade talks with other teams. A number of team have expressed interest in the star. The Miami Heat are one that sticks out in particular. Though Cleveland, Washington, Charlotte, Brooklyn and the Lakers have also pursued Mitchell at varying times.

But for now, it sounds like Mitchell better get comfortable in Salt Lake City.