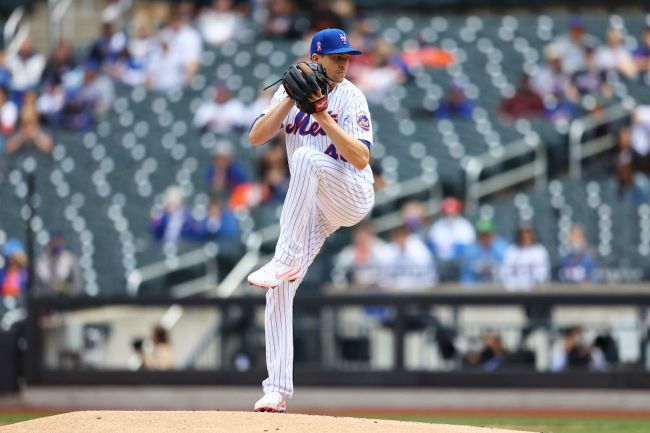 Don’t look now, but we’re just a few weeks out from the Dog Days of Baseball Summer and my New York Mets, despite the raft of injuries they’ve suffered, are somehow leading the National League East by 3.5 games.

Part of the Mets’ success this season, obviously, has to do with having the world’s best pitcher, Jacob deGrom, at the top of the rotation. In fact, deGrom has been so lights out that it’s left some idiot baseball “fans” foolishly wondering whether or not he’s cheating.

Jacob Decheats or since it’s not Bauer or Cole, we don’t care? Lol pic.twitter.com/XWG5lK99GV

After this tweet suggesting that deGrom is using a banned substance began to gain traction, various Mets players took it upon themselves to defend their social media-less ace pitcher.

I promise you he doesn’t use anything. If he did they would be lucky to even foul tip the ball👌🏻 cc: @McCannon33 https://t.co/vx6kWI3MMB 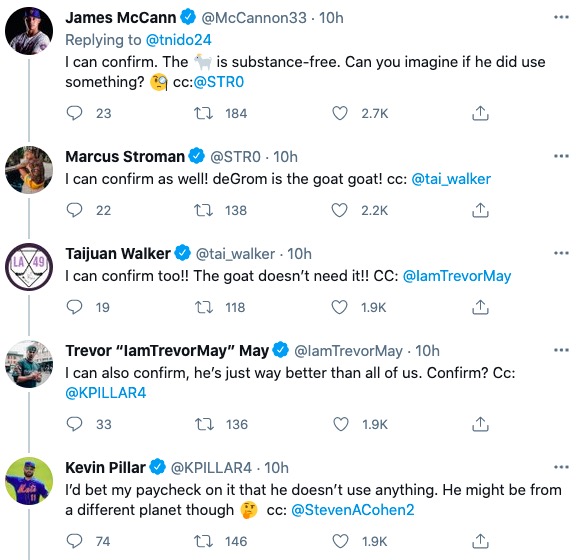 What Jacob deGrom has been doing is nothing short of legendary. Everyone around the league is in awe when he touches the mound. Truly the goat of this generation in my eyes. Most humble/chill/approachable dude off the field. Killer on the mound. Thankful to learn from him daily!

To be fair, deGrom’s stats this season are so genuinely mindblowing that chalking it up to cheating can feel like the only logical explanation: not only is deGrom’s ERA sitting at an absurd 0.62 (!!!) but he’s elevated his stuff to an otherworldly status, as he’s thrown SIXTY 100+ mph pitches in his last two starts alone.

In his past two starts, Jacob deGrom has thrown SIXTY 100+ mph pitches. 🤯 pic.twitter.com/FNqhwpM9pH

deGrom is not only putting himself in the conversation of being the greatest pitcher alive right now but as one of the best to ever do it in the history of the game. There’s a very real chance that deGrom takes home his third Cy Young in four years, and yet he seems to, somehow, still be improving.

RELATED: The Childlike Enthusiasm Of Mets Pitcher Tommy Hunter Following First MLB Hit Is Why Sports Are The Best