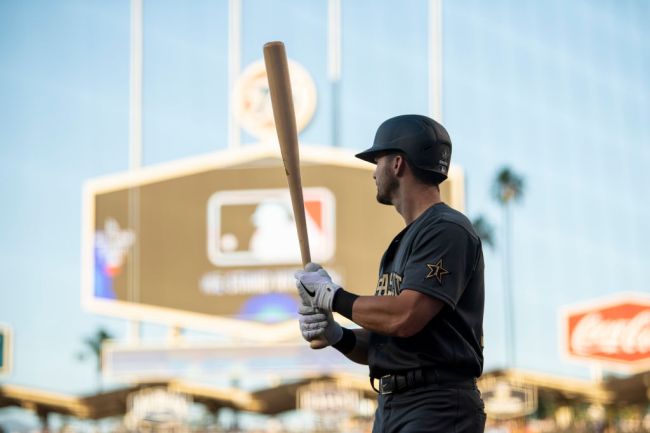 With the trade deadline quickly approaching and the New York Yankees holding the MLB’s best record, you know the Yankees are going to be looking to spend right up until the deadline.

There are some who were expecting that spending to take the form of a huge Juan Soto deal, but it turns out that they may be pursuing a different outfielder. Today, MLB insider Mark Feinsand has reported that the Yankees have emerged as a serious contender to make a deal for Kansas City Royals outfielder Andrew Benintendi.

The Yankees have emerged as “serious contenders” for Royals LF Andrew Benintendi, per source.

The report comes as a bit of a surprise after it was recently reported that the Yankees had lost interest in Benintendi due to his inability to play road games against the Toronto Blue Jays. Now it seems that is something the Yankees are willing to overlook to add the talented left handed bat.

Coming off of a Gold Glove-winning 2021 season, Benintendi has been having one of the most successful years of his career at the plate in 2022. He is currently batting .319 with 37 runs scored and 39 more driven in through his first 88 games of the season. Those helped Benintendi earn the first All-Star nod of his career this season.

Benintendi would give one of baseball’s best offenses one of the few things it is missing right now. The Yankees don’t have a left handed bat at the front of the order that can reliably reach base.

Right now, their best left handed hitter is Anthony Rizzo, whose 22 home runs have been a major contribution to the Yankees’ offense, but he’s batting .224 this season. The home runs are great, but those have disappeared for the Yankees in the playoffs in recent years and their lack of guys who can reliably reach base has led to them coming up short.