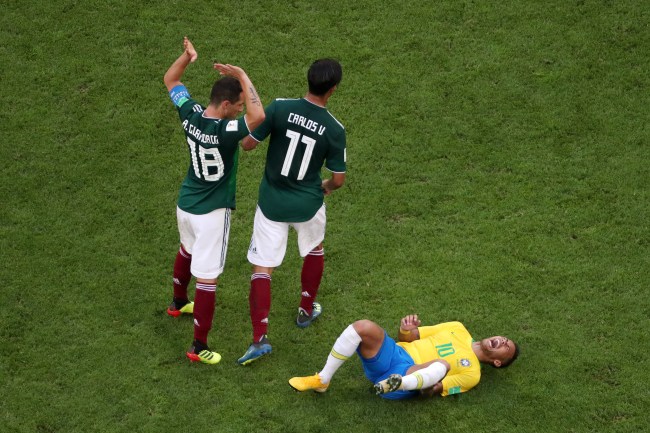 Brazil has advanced to the World Cup quarterfinals thanks in large part to the foot of Neymar, who finished with a goal and an assist Monday in Brazil’s 2-0 win over Mexico. But Brazil’s seventh straight quarterfinal match was somewhat marred by one of the world’s best players flopping egregiously.

With 20 minutes to go in the game and Brazil up 1-0, Mexico’s Miguel Layun pulled a scumbag move when he stepped on the right ankle of Neymar when he was on the ground. Neymar began writhing in pain, as if someone took a battle axe to it.

“Honestly, it’s a red card nowadays because they’ve spotted standing on his foot. But I mean the pain threshold of Neymar is just incredibly low, I must admit. I wouldn’t like to see him coming out of the doctor’s surgery after getting a flu injection.

For the casual soccer fan like me, this type of flopping is not only pathetic looking but confounding. As an avid NBA fan, I’ve witnessed a fair share of flopping. The difference between soccer and basketball is that typically NBA players flop, but just enough so they can draw a foul. It’s common for soccer players to flop past the point of using it for gain. It ventures into performance art. It insults the intelligence of everyone who witnesses it. People on Twitter tend to agree.

Gordon Hayward broke his ankle completely in half and showed about 10 percent of the pain Neymar just did.

If Neymar was a dog… 😅 pic.twitter.com/q23YbrTDyG

Only way to deal with Neymar

Whenever @neymarjr goes down, the world responds in the words of #RonBurgundy. #BRAMEX #WorldCup #diving pic.twitter.com/eJAh43yEaY

The Rock whenever Steve Austin gave him the Stone Cold stunner pic.twitter.com/d2JXjwYuYt

And the Oscar goes to #Neymar @neymarjr pic.twitter.com/Jv1vvymRL4

Mexico fans are venting on Twitter but here is a poignant counterpoint:

*mexicans*
neymar is such a bad actor