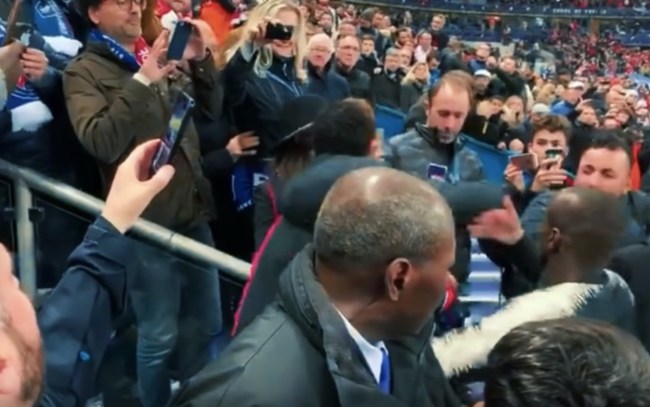 Brazilian soccer superstar Neymar Jr. made headlines over the weekend after footage emerged that appears to show him punching a heckling fan in the face after accepting a loser’s medal in the French Cup Final.

The incident took place after PSG lost to Ligue 1’s Rennes in a shootout after a 2-2 game. So Neymar and all of his PSG teammates were already feeling down. Sure, they ran away with the Ligue 1 title this season but they fizzled out of the Champions League and they failed to win a trophy in the French Cup Final when they were expected to compete for and potentially win all three trophies.

In the clip, you can see the fan say something to Neymar who reacts by appearing to throw a punch. From where I’m sitting, it doesn’t really look like Neymar connects that well but AFP reported the fan had a bloody nose and cut lip after the incident.

Here’s an alternate angle and I still don’t think Neymar connected enough to give this guy a bloody nose and lip. The heckling fan is reportedly friends with one of the Rennes players (who won the game) so I think you can kind of read between the lines here.

Neymar appears to 'punch at a fan goading him' after PSG's shock cup final defeat to Rennes https://t.co/vZusKhrMMc pic.twitter.com/9tyJYQuqZB

I’ve always thought that players should have more freedom to react to hecklers and protect themselves on the field. If someone in your everyday life spent hours harassing you then you wouldn’t just sit back and take it, would you? Something would be done about it. But that’s not the case in professional sports, at least not the precedent. And Neymar Jr. has since apologized for his actions according to Business Insider

Agence France-Presse reports that the fan, identified as a 28-year-old delivery driver called Edouard, had taunted many PSG players according to Alex Bernardo, a friend of Neymar’s.
Bernardo said Edouard called the PSG goalkeeper Gianluigi Buffon “dirty,” the midfielder Marco Verratti “racist,” and said Neymar needed to “go and learn to play football” even though the forward scored one goal and created another in the match itself. The soccer data website Whoscored.com gave Neymar a perfect score of 10/10 for his performance in the cup final, rendering Edouard’s apparent criticism questionable.

Regardless, Neymar has recognized that his behavior was poor. “Did I act badly?” Neymar asked in an Instagram comment, as reported by AFP. “Yes. But no one can stay indifferent.” (via)

I can understand how a PSG fan would be shocked that their team lost the French Cup Final to Rennes when PSG has the highest-paid players in the league. That’s not an exaggeration, even the PSG players on the bench have higher weekly salaries than players on any other team in France. They’re like the old school Yankees on steroids when it comes to salaries.

It’s unclear what the fallout from this incident will be and it comes just days after it was announced that Neymar would be suspended for PSG’s first three Champions League games next season after ‘insulting’ the referees. If they’re handing out three-game bans for insults I have to think that a suspension is coming for punching a fan in the face, if that’s what the investigation proves.

For more on this story, you can click here to visit Business Insider.