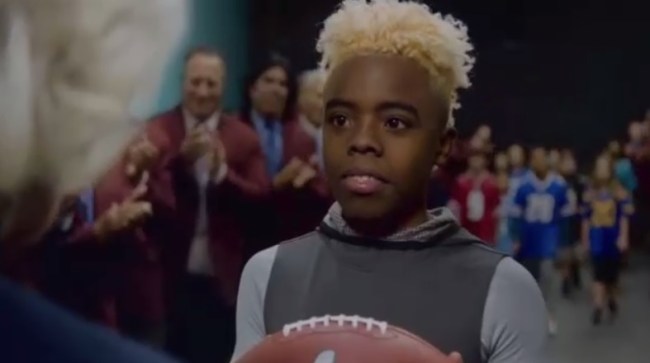 One of the earliest Super Bowl commercials during Sunday’s game is going to be hard to top.

Right before the start of the game, the NFL 100 aired their commercial that features a kid running through several different cities as several current players and legends of the game cheer him on.

The commercial continues as the kid runs into Hard Rock Stadium in real-time and hands the ball off the referee.

Take it to the house, kid!https://t.co/rHva1nbBL6

People at home watching have already declared it the best commercial of the Super Bowl.

NFL 100 commercial with the kids was awesome, the ad started with kids running and used many famous people, but the best part was the kids from the commercial ran onto the field in real time. This was very effective and made me more curious about NFL 100. #WigtonSBLIV

Not sure any commercial will out do the NFL 100 commercial that was just on…. it was awesome

THAT GAME BALL DELIVERY COMMERCIAL WAS INCREDIBLE!!
That’s how you keep the fans involved for another 100 yrs. So many greats in 1 vid. I’m in awe! @NFL

That NFL 100 commercial is going to be tough to top. That was awesome