The ‘NFL 2021’ Edition Of ‘Bad Lip Reading’ Gets Very, Very Weird With Brady, Mahomes And More 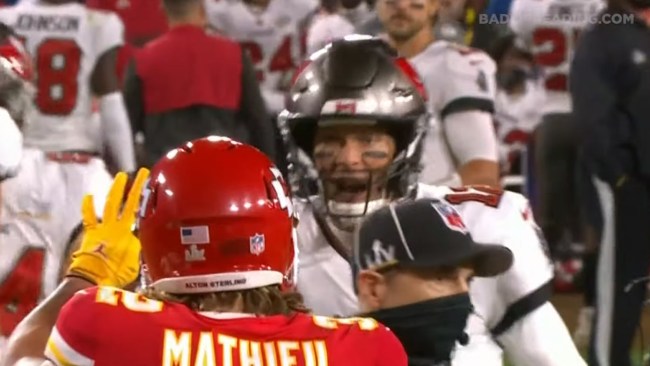 It’s been awhile since we’ve had a “Bad Lip Reading” that’s really been worth sharing. The folks who make these videos only made four of them this year and three of them featured former President Donald Trump. The other one was on BTS singing “Monster Run.”

So, yeah, like I said, there hasn’t been too much to get excited about regarding “Bad Lip Reading” videos for awhile now.

That being said, boy are they back now. This year’s annual edition of bad lip reading the NFL is a doozy.

As usual, they spared almost no one. Everybody from Ezekiel Elliott and Tyreek Hill to Daniel Jones and Aaron Rodgers gets hilariously mocked.

The BLR guys saved the worst for Tom Brady and Matt Ryan, however, as they make numerous appearances, including Brady jawing with Tyrann Mathieu in Super Bowl 55.

Related: The ‘NFL 2020’ Version Of ‘Bad Lip Reading’ Shows Absolutely No Mercy On Any Player, Coach Or Official

Scattered throughout the video there was some serious WTFery going on, especially when they took a look at a slew of player introductions with players like Huxley Icefish, Quizzlan Margu, Governor Gucci, Buck Tasty, Johnny Marvelous, Grocklin Sandpaper, and Boneslaw Duct Tape.

They even threw in a very special song at the end, just to ramp the weird factor up to 11.

After watching that we’re really going to need the “Bad Lip Reading” folks to dial up their production. It’s been over two years since a Major League Baseball edition and almost three since an NBA version.