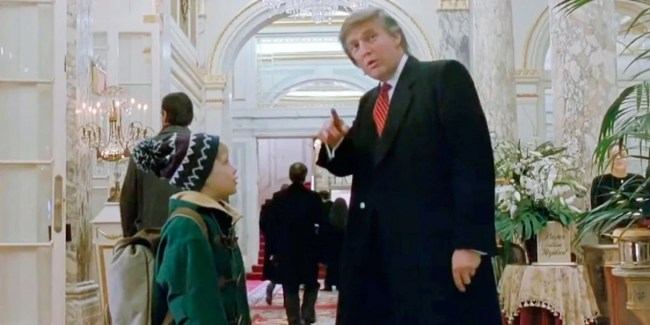 As we all are well aware by now, following the invasion of the United States Capitol by a bunch of domestic terrorists, a lot of people blamed the current sitting President Donald Trump for inciting these hooligans into doing so.

Of course, this being the internet, people were almost immediately reminded that Trump made a rather infamous cameo in the classic 1992 film Home Alone 2: Lost in New York.

In his brief appearance, Trump runs into our hero Kevin McCallister inside the Plaza Hotel, which Trump owned at the time, and gives Kevin directions to the lobby.

Related: The Internet Wants To Know Why Area 51 Has Better Security Than The U.S. Capitol

Home Alone 2 director Christopher Columbus recently discussed Trump’s cameo in the film, saying, “Like most locations in New York City, you just pay a fee and you are allowed to shoot in that location. We approached The Plaza Hotel, which Trump owned at the time, because we wanted to shoot in the lobby. We couldn’t rebuild The Plaza on a soundstage.

“Trump said okay,” Columbus continued. “We paid the fee, but he also said, ‘The only way you can use the Plaza is if I’m in the movie.’ So we agreed to put him in the movie, and when we screened it for the first time the oddest thing happened: People cheered when Trump showed up on-screen. So I said to my editor, ‘Leave him in the movie. It’s a moment for the audience.’ But he did bully his way into the movie.”

This past Christmas, it was noticed that the Canadian Broadcast Company had edited Trump out of the film, something they claim was done “to allow for commercial time” and “were done in 2014” when they first acquired the film.

While that may or may not be true, one thing is today is certain – people on the internet are editing Trump out of Home Alone 2 and it’s not being done “to allow for commercial time.”

The resulting images and memes are pretty hilarious, regardless of whatever way you lean politically.

I can’t believe they were able to get George Lucas’ team to remove him in the Home Alone 2 special edition. pic.twitter.com/SzLbNjh9y3

In all future releases of "Home Alone 2", the role of [redacted] will now be played by Hatsune Miku. pic.twitter.com/du2ZlC8Zcg

I saw that Home Alone 2 is trending with Donald Trump being removed from the film... so I replaced him with #SAFC legend Darron Gibson pic.twitter.com/c0NQgr8zMU

All future release of Home Alone 2 will feature heavy instead of Donald Trump. pic.twitter.com/EFMKFL1EGG

So I was reading about the bit in Home Alone 2 where Kevin stops to ask for directions and apparently people have been digitally removing Donald Trump and one thing sort of led to another. pic.twitter.com/wSR3JQuisf

The sad (best) thing about these memes and images is Trump, being banned from every major social media platform, isn’t getting to experience all of them from his own accounts.