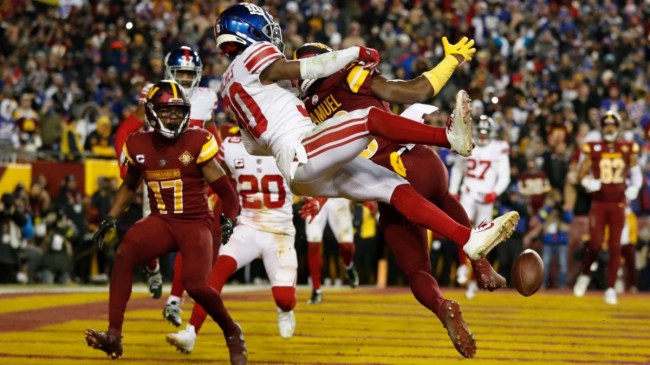 Last week’s Sunday night game had a whole lot of officiating controversy down the stretch.

The Washington Commanders were on the wrong end of a pair of very questionable calls as they were attempting to make a comeback against the New York Giants.

The first was an illegal formation call against Terry McLaurin after McLaurin appeared to be told by an official that he was lined up correctly.

Then the refs really blew it with the Commanders facing a 4th down from the 6-yard line. Taylor Heinicke tried to get the ball to Curtis Samuel in the end zone, but the pass fell incomplete. It seemed clear to most fans that pass interference should have been called, but no flag ever came.

The no-call allowed the Giants to kneel down for the win and move ahead of the Commanders in the playoff race.

After the game, referee John Hussey wouldn’t admit the mistake.

Pass interference is a judgment call,” referee John Hussey said. “To the officials it didn’t rise to what they felt was a restriction, thus they didn’t call it. That’s basically the bottom line there.

Today, NFL insiders Ian Rapoport and Tom Pelissero revealed that the NFL has admitted the mistake to the Commanders.

NFL informed Commanders that officials should have called DPI on final play in loss to Giants, per @RapSheet and @TomPelissero https://t.co/ANQzawIuWC pic.twitter.com/BHFWm062B4

The Commanders still would have needed to punch it in from the 1, put together a successful 2-point conversion, and stop the Giants from scoring on the following possession, but the refs still clearly robbed them of the opportunity to win this game.

It’s unfortunate for the Washington Commanders, but hopefully disastrous calls like this will lead the NFL to find some way to improve the quality of the officiating around the league.