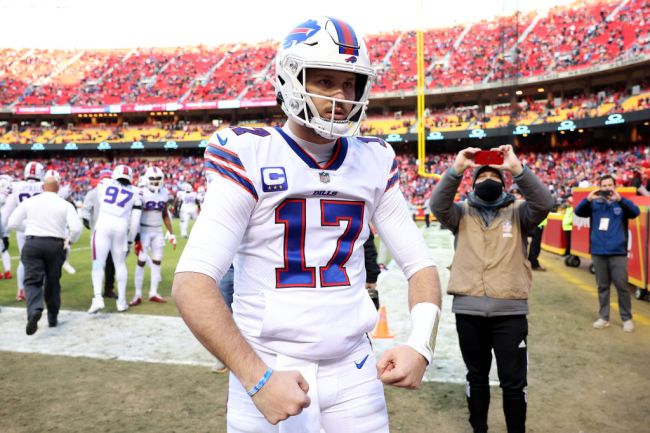 Josh Allen made a strong case for himself to be included in the conversation as one of the NFL’s top quarterbacks last season, especially in his Divisional Round duel with Patrick Mahomes in the playoffs. Some even believe he could be the league’s best QB.

NFL analyst Chris Simms revealed today that he shares that opinion, but he reasoning for why Allen is the best in the league is flawed.

#1 Josh Allen
He is the best QB in the NFL right now. There is no doubt. He has the most dynamic arm in football and no one is asked to carry their team more on a weekly basis. #SimmsTop40

That last part sounds like a pretty good reason to pick Josh Allen as the league’s top quarterback. There’s just one problem. It’s not true. In fact, there was no team in football last season that asked for less from their offense than the Buffalo Bills.

The Bills had the NFL’s best scoring defense in 2021, allowing just 289 points over the course of the season (or 17 per game). The next best team allowed 14 more points and 3rd place allowed an extra 33.

It’s also not like the Bills haven’t given Josh Allen help on the offensive side of the ball. They went out and got him Stefon Diggs, who has been one of the NFL’s best receivers over the past two seasons. They brought in Cole Beasley 3 years ago so he’d have a dependable slot receiver. They signed Emmanuel Sanders last season.

They’ve even spent a number of mid-round draft picks on their offense in recent seasons. Dawson Knox, Devin Singletary, and Zack Moss were all 3rd round picks and they spent a 4th on Gabriel Davis 2 years ago.

While Allen has certainly been an elite quarterback over the last couple of seasons, it’s hard to make the argument that he has been carrying the Bills, especially when Patrick Mahomes and Aaron Rodgers play for teams that allowed 75 and 82 more points than the Bills respectively.

Simms could be right and Allen could actually be the best QB in football, it just isn’t because he has been carrying the Bills.