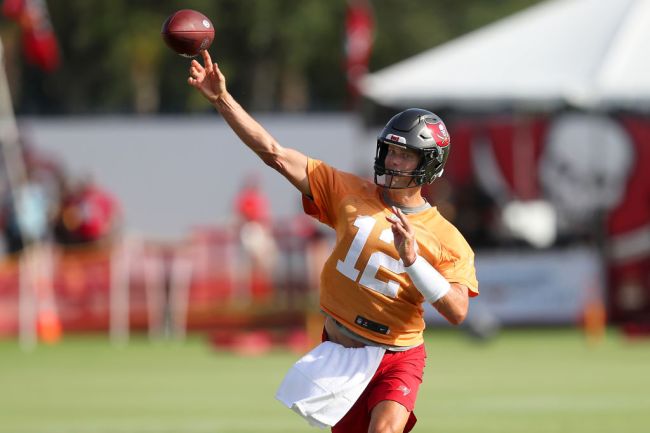 Could this be the year that Tom Brady finally starts to play like a quarterback in his 40s? A ton of NFL bettors seem to think so.

2. The season-long player prop that has drawn most money is Miles Sanders UNDER 5.5 touchdowns. It also hasn't received a single over bet yet.

The Tampa Bay Buccaneers schedule for 2022 is tough, but it’s surprising to see so many people expecting them to finish under 11.5 wins. Last season they won 13 games during the regular season and they won 11 in Brady’s first season with the team in a 16-game season.

The injury to Ryan Jensen is certainly a blow for the Bucs offense, but with a healthy Chris Godwin and the additions of Russell Gage and Julio Jones, the Bucs should still have plenty of firepower.

Bettors must believe that this is the year we finally start to see a decline from Tom Brady. The Bucs get favorable matchups against the Panthers and Falcons in their division and a non-divisional matchup against the Seahawks.

They also get matchups with the Steelers, who have reportedly been having QB issues in camp, and the Browns, who could be without Deshaun Watson if the NFL gets their desired suspension.

If the Bucs can win all of those matchup they’d be expect to, they’d only have to go .500 the rest of the season to hit 12 wins. That doesn’t seem like it’s asking too much of Tom Brady with his current supporting cast unless this is the year we finally start to see signs of decline.

It seems there will certainly be plenty of bettors hoping that decline comes soon so this bet cashes, otherwise Brady will be making a bunch of money for the sportsbook.