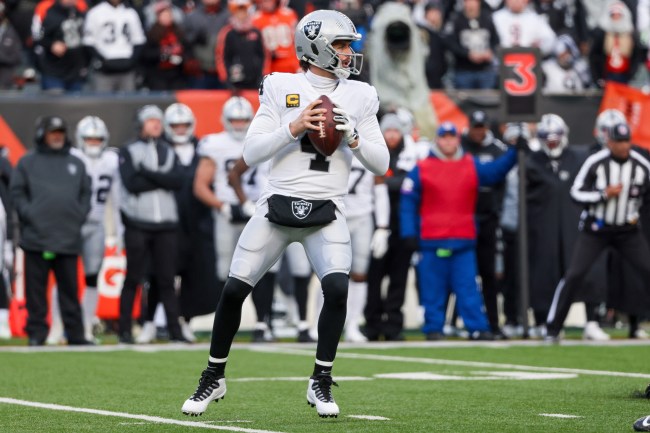 There may not be two guys in the NFL who can understand each other like Derek Carr and Carson Wentz. They both went to small colleges before being drafted to become the franchise quarterbacks for struggling franchises. They’ve both gone through long stretches of their careers with bad receiving corps and poor blocking.

With neither quarterback currently having much job security, NFL.com’s Marc Stressler thinks that it makes sense for Derek Carr to be traded to the Indianapolis Colts.

“Wentz and the Colts feel destined for Splitsville, but the QB market lacks juice. An available Carr would vibe with Frank Reich, a masterful coach searching for a long-term answer.” pic.twitter.com/0jy0TJ71gY

This would be quite the move. The Indianapolis Colts just traded for Carson Wentz a year ago, but don’t seem to have very much faith in the quarterback, seemingly entirely based on the last two games of the year.

Wentz was actually a decent QB this year. He put up 3563 yards this year and 27:7 TD:Int ratio in spite of offensive line problems and Zach Pascal as his number 2 receiver.

Meanwhile, Derek Carr had one of the best years of his career. He finished 5th in the league in passing yards and navigated an unbelievable amount of chaos to lead the Raiders to the playoffs.

A Carr-Wentz swap would be an interesting scenario for these two players and their teams. Carson Wentz likely wouldn’t mind once again having one of the league’s top tight ends in an offense that wants to throw.

Derek Carr would get a bellcow running back and hopefully better protection next year. The Colts would also be the strongest defense he’s ever played with.

A fresh start could be exactly what both Derek Carr and Carson Wentz need right now.