How Should NFL Combine Players Answer Those Absurd Questions? Some Interview Coaches Reveal Their Tips 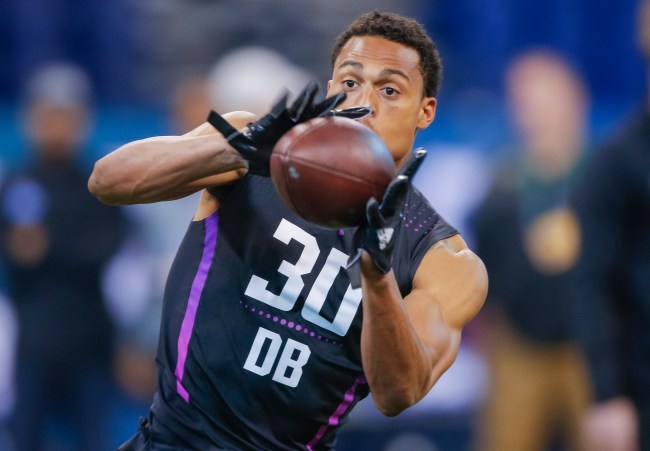 The NFL Combine is happening this week in Indianapolis, and, while it’s a time for some of the NFL Draft prospects to showcase their skills, there’s another huge piece of the puzzle that gets evaluated during the entire process — their interviewing skills. Over the years, we’ve heard extremely weird stories about some of the absurd questions players have been asked by NFL teams, making us wonder why the f*ck any team needs to know if a player would choose a knife or gun to kill someone? But, hey, it’s part of the evaluation process… I guess?

So, how does one play it cool and do their best not to choke out the interviewer when he’s spending time with individual teams during this process? Naturally, they hire a coach to help with their responses, making sure they don’t completely botch up the conversation, which, potentially, could cost a kid millions of dollars should he slide down draft boards.

Strangest interview question I've heard a NFL team ask a prospect so far: Do you find your mother attractive? #NFLCombine

In a pretty interesting piece, FTW.USAToday spoke with a couple NFL Combine interview coaches, who revealed what they tell their clients when they get hit with a question that seems like it’s way out of left field. Here’s what Neil Stratton from Inside the League and Robert Price of Elite Minds had to say about the advice they give players.

“The bottom line is, every question asked, (teams) already have the answer or will have the answer,” says Stratton. “It profits you not to tell less than the whole truth.”

“They need to know you’ve learned from your mistakes,” Stratton adds. “I know that sounds simple. That’s a the crux of what these teams are trying to find out about the players who come to Indianapolis.”

Stratton concurred, adding, “The team probably already knows, so it would be foolish to not disclose it.”

Price has had clients who planned to have family members live with them, and he’s urged them to share those plans: “She doesn’t work, but my plan is to have my mom support me as she’s done even while I’ve been in college. I’m looking forward to have her in whatever city I’m in, to help with my transition, because then I know I’ll have some family and support to allow me get to work on time and keep my head where it needs to be and focused on the task at hand.”

That’s one way to show you’re focused on the future.

Be Ready For Anything

“It may turn into adversarial interview,” Stratton says. “They may have issues with you and try to get you rattled. Different teams have different philosophies. Often you have a good cop or bad cop in the interview. It’s not unlike what you’re going to face on the field.”

Price talks about “ambivalent questions,” ones that reveal to the interviewers a player’s thought process but that have no apparent right or wrong answer, like, “Would you rather be a bull or a tiger?”

Again, there’s no correct answer. Price asked me to give a reply to that question — I told him I’d rather be a tiger because I’d be fast and have sharp teeth to catch and devour my prey. He replied by asking if my career and life choices reflected that, and while I said no, Price said he would then ask me to find examples when I was more like a tiger, in order to help me understand more about my personality and mindset.

Find A Way To Avoid Showing Anger, Even If The Question Warrants It

Dez Bryant was asked by then-Dolphins general manger Jeff Ireland if the wideout’s mother was a prostitute? Bryant said he got “really mad” but didn’t show it during his interview. That’s key, and prospects must develop strategies ahead of time to prevent blowups.

In a case like the question about Derrius Guice’s sexual orientation, Price provided two possible routes to take.

You could say, “That’s not what we’re here to do, that won’t change the work I’ve done on the football field or what I’m doing right now. I will choose not to answer that.”

“You can always ask scout or executive, ‘Do you feel comfortable sharing your sexual orientation with me?’” he added. ” ‘I’m curious if this is an organization I want to work with and for.’ If they’re up for answering, then go for it. If they’re not, let’s move along to something about what I can do on the field.”

But the bottom line is interviews are as important as a player’s measureables and physicality recorded at the combine.

“No one is so talented that character means nothing to teams,” Stratton said.

That’s all pretty interesting advice given the high stakes of the NFL Combine. It’s even more interesting to think that teams actually slide a prospect higher or lower on its draft board based off how a player might respond to those ridiculous questions.

While most of us couldn’t imagine being asked questions like this in an interview we go to, at the NFL Combine, it’s all part of the strategy teams use to get to know a player better. After all, they’re, potentially, investing millions of dollars in a prospect, so they want to make sure the player can handle himself under pressure — even if the question is meant to make him feel embarrassed or pissed off.

To see the entire piece from FTW.USAToday about the NFL Combine interview advice, head on over to their website.