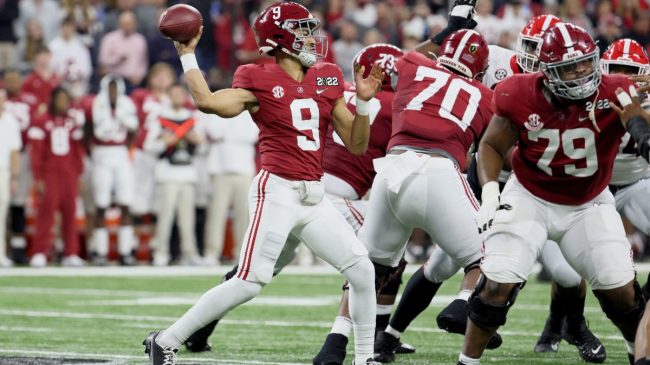 The 2022 NFL Draft is officially behind us.

Georgia’s Travon Walker slid up the boards to go No. 1 overall, with a pair of defenders in Aidan Hutchinson and Derek Stingley following close behind.

This year’s festivities were definitely fun to watch, especially with the event being held in Las Vegas, but with the draft over scouts are already turning their attention to next year.

Mock drafts are beginning to circulate for the class of 2023, showing the top players at their respective positions. We’re also seeing sportsbooks project who they believe will be the top prospects taken in next year’s selection process.

The latest odds at one particular sportsbook suggest that two programs will rule college football in the coming season.

DraftKings Sportsbook recently unveiled the top eight players, according to the odds, that have a chance to go with the No. 1 overall pick in 2023.

Unbelievably, the top five hail from either Alabama or Ohio State.

It’s no surprise that those are two of the nation’s most talented teams, but to see that they boast multiple performers with top pick potential, it shows that they might be a cut above the rest.

Alabama will be looking to avenge last year’s national championship loss to Georgia. The Crimson Tide have made six of the last seven title games, posting a 3-3 record since 2015.

Ohio State, on the other hand, lost to Alabama in the 2020 championship. They’re looking to get back to the College Football Playoff after being spurned by archrival Michigan last season.

It certainly appears that they have the fire power to do so. Three of the top five players play for the Buckeyes, including the favorite in QB CJ Stroud.

We’ll see how the season play out for these programs when Fall rolls around. At this point, though, it looks like they’re on crash course for a title game meeting.