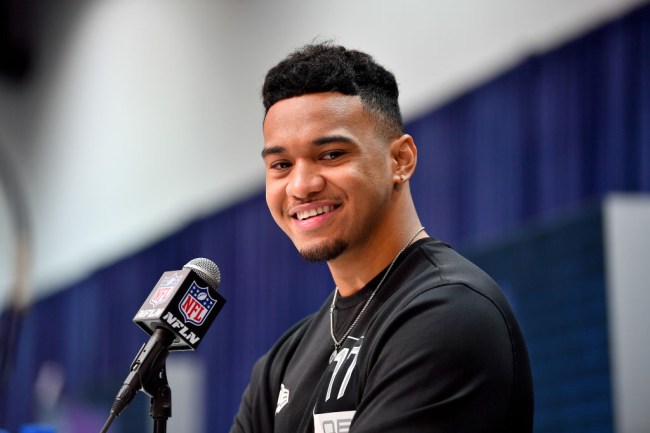 Tua Tagovailoa has been linked to the Miami Dolphins before the 2019 college football season even kicked off. Since then, however, things have changed. The Dolphins weren’t as bad as people expected them to be going 5-11 last season giving them the No. 5 pick in the 2020 NFL Draft.

The Tua to Miami link is still alive and well thanks to Joe Burrow having such a dominant season and the Bengals in need of a quarterback with the first overall pick. Add that to the fact that the three other teams between the Bengals and Dolphins first-round picks aren’t necessarily in need of a quarterback, Tagovailoa could be wearing the aqua and orange next season.

With that being said, there is always the possibility of a team trading up, which throws a wrinkle into everything. NFL Network’s Daniel Jeremiah believes that the Chargers (No. 6 pick), not the Dolphins, are most likely to trade spots with the Lions (No. 3 pick) to snag the Alabama quarterback.

“I think the Detroit Lions trade back to No. 5 or No. 6 and I think it’s either the Dolphins or the Chargers [who will trade up]. My money is on the Chargers trading up to get this pick and take Tua because I believe the Miami Dolphins have a comfort level with either Herbert or with Tua. If that’s the case, I could see a situation where the Chargers go up and get Tua and the Dolphins hold on to all of these picks because they have so many needs and potentially taking Justin Herbert.”

The Chargers are looking to fill the shoes of Philip Rivers and while they do have Tyrod Taylor on the roster, they could be looking to make a major splash in the first round and moving down to pick Tagovailoa is certainly a major splash.

There’s also the possibility that the Redskins spoil the entire party by picking Tagovailoa with the No. 2 pick. There have also been reports that Tagovailoa’s initial meeting with the Dolphins did not go well.

It’s going to be interesting to see what all happens on April 23 when the Draft gets underway in Las Vegas.