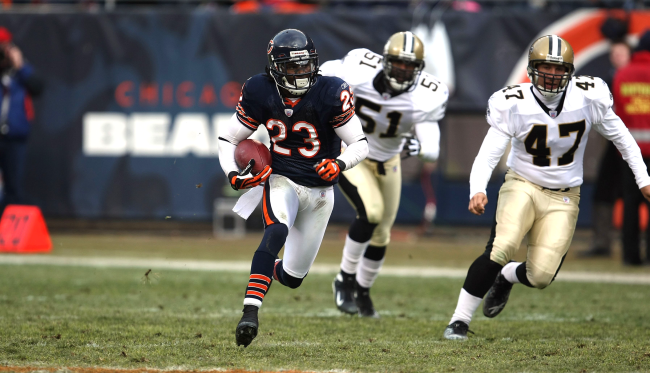 Usually, if you are the greatest at something and there is some sort of award to be given for being that in your given profession, it’s a no-brainer that you will be given that honor.

Such was not the case Thursday night when the Pro Football Hall of Fame class of 2022 was announced at the NFL Honors event and Devin Hester’s name was not read.

Hester played in the NFL for 11 seasons and by the time he was done most considered him to be the greatest return specialist in NFL history.

Devin Hester believes he is a Hall of Famer

“You look at my stats, you see I have the most return touchdowns of all time,” Hester told Sports Illustrated this week. “Imagine if teams kicked to me my whole life, how crazy the stats would be. I really only got two or three good years of getting the ball kicked to me.”

Related: Let’s All Take A Moment To Remember How Dominant Devin Hester Was In His Prime By Looking Back At His Insane Highlight Reel

Even Deion Sanders, one of the most feared kick returners ever thinks Devin Hester was extra special.

“There’s no man that was feared more than Devin Hester with a ball in his hands on special teams,” said Sanders. “And that’s coming from me.”

Yet here we sit on Friday morning and Devin Hester is not a Hall of Famer.

First off congrats to the 2022 HOF, but this hurts for me not being a first ballot. I really wanted this one bad, but life goes on and hopefully it will happen someday 💯✊🏾🙏🏾 https://t.co/xmVYIknc4D

Devin Hester, however, is the one fans seem most angry about not making the Hall of Fame.

You can't really understate how Hester impacted games during his Bears peak run. It was electric, and you could tell how terrified opposing punters and ST coaches were. https://t.co/P2Q53o6k3j

The Hall of Fame is a silly fan/media debate but it means EVERYTHING to the enshrined. Hester desperately wanted to be - and deserved to be - first ballot. It meant a lot to him. And tonight he was told, “You’re not a Hall of Famer. Sam Mills is.” It sucks.

Hester was one of only two specialists on the NFL 100 All-Time team. He wasn't just the best to do it during his era. He's been recognized as the best of all time. Hard to see how that's not Hall of Fame creds.

Show me a player that was better at his position than Devin Hester was at Kick/Punt Returning, I’ll wait. Congratulations to Leroy Butler and the others but Hester is a Hall of Famer, they just forgot to vote for him pic.twitter.com/kQirqUAFy5

As a Packer fan, you're a legend and absolutely deserve it. You were terrifying to face each and every game and you single handedly changed your opponents' strategies. Your legacy is already cemented and you'll get in, I guarantee it

As a @packers fan, there’s never been no one better. To be recognized by the fans is better than a HoF recognition. You’ll get there. Be patient…like waiting for a ball to land in your hands before taking off like your hair is on fire. 🐐 returner!

Hester punished you for having the audacity of even trying. He was as dominant as any other respective great at what they did. You do not run on Singletary, you do not break contain on Barry, and you do not kick to Devin Hester.

Just a matter of when. pic.twitter.com/4Bqv3HfQ0A